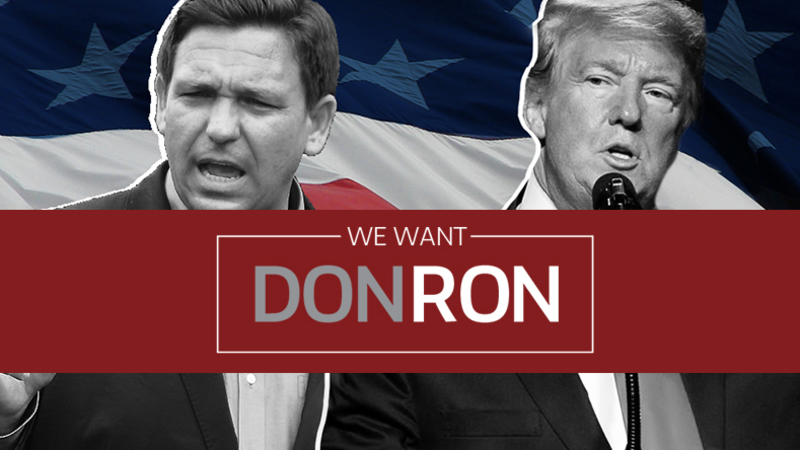 [Editors note: Constitutional Rights PAC Chairman Larry Ward’s “We Want Don Ron 2024” movement, calling on former President Donald Trump and Florida Gov. Ron DeSantis to join forces in 2024, has already reportedly gained the support of millions of Americans. “The We Want Don Ron 2024 movement is growing every day because this is the ticket America wants and so desperately needs. It’s a daring plan, yes, but it’s necessary to save America,” Ward said.]

A unique and unprecedented political movement is sweeping America. A movement that could determine the outcome of the next presidential election. And, if successful, change the course of American history.

The movement is spearheaded by a highly respected, longtime political leader with a decades-long track record of effective political movements.

“I have been blessed to organize grassroots campaigns in the past that have drawn millions of followers within a matter of weeks,” says Ward, whose worldwide conservative activist database numbers in the hundreds of millions. “And the truth is, I have never seen a response like what we are already getting for We Want Don Ron 2024.”

“I believe the reason is simple: a Don-Ron ticket in 2024 is what America wants and desperately needs,” stated Ward.

Think back to America in 2008; recall the cultural and social norms, the values, and the truths everyone, right or left, espoused. Democrats worked relentlessly and effectively in the past decade to set America on the course of seemingly no return. But we have an opportunity to change that.

“We will return America to her former greatness,” declared Ward. “Imagine for a moment how substantially the country would be impacted by a Trump-DeSantis win in 2024.”

“It would give us not four, not eight, but 12 years of powerhouse, conservative leadership in the White House. That is the time required to undo the 12 years of Obama’s radical leftist leadership, which continues to plunge America further into darkness and decay. Twelve years would create lasting political, societal, and legal changes not so easily undermined by the Left.”

During Trump’s term, DeSantis would have ample time to clear out the deep state, paving way for an even more effective term in office. “Both President Trump and Governor DeSantis have time and time again rebuked the deep state and our corrupted institutions, and both have signaled they are ready to clean house.”

“Give DeSantis four years as Vice President to drain the swamp,” said Ward, “and he’ll be set up for a Presidency of unprecedented success.”

There is not another conservative in office today who’s taking swings like DeSantis. On every count, the Governor is demonstrating what using political power for good looks like. This is foreign to many conservatives, who have grown fond of losing. When given an ounce of power, they bury it like the talents in Jesus’s parable. Not Ron DeSantis; for what he’s been given, much has been profited by the people.

“Ron DeSantis is a heavyweight fighter,” said Ward. “And so is Donald Trump. These two are the toughest, biggest guys we have. Let’s not have them beat each other to death in the primary, but instead unite, and smack down the establishment.”

We Want Don Ron 2024 is a unique call for the GOP to put the future of America first. That should be a given, but it’s not.

“Donald Trump and Ron DeSantis are the two most formidable candidates for 2024. So what would stop us from putting the two strongest leaders in the White House?” asked Ward. “The disease of identity politics.”

The sole reason establishment Republicans would shy away from such a strong ticket is for fear of palatability. Ask yourself, palatability to whom? Since when do conservatives adhere to identity politics, and specifically, affirmative action at the ballot box?

“Biden sacrificed competency for woke points when he picked Kamala as his running mate. We must not fool ourselves into thinking Donald Trump must do the same,” warned Ward.

The golden Don-Ron 2024 ticket is right in front of us, and it’s ours if we want it.

“We have political power when we unite voices. That’s why we created We Want Don Ron 2024,” said Ward. “We plan to present both the President and the Governor with petitions signed by millions of patriotic Americans urging them to not wait until it’s too late but to team up now. In so doing, we’ll provide them with the grassroots backing they need to bring the Biden regime to a halt – and to an end.”

Ward and other movement leaders are looking to meet with top staffers from the Trump and DeSantis organizations in the first week of October. So, those wishing to sign onto the nationwide movement need to jump on the burgeoning bandwagon today.
“We Want Don Ron could not only change the course of the 2024 election but that of American history forever.”