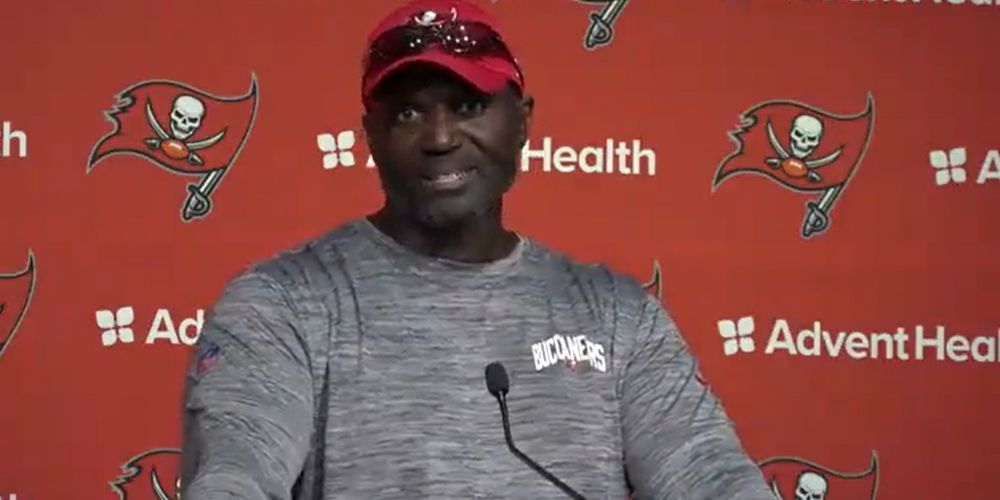 Tampa Bay Buccaneers head coach Todd Bowles on Wednesday put a stop to several left-wing reporters attempting to insert race into questions about his relationships with his players and other coaches.

Bowles was asked about his upcoming coaching matchup with the Pittsburgh Steelers head coach Mike Tomlin because the pair are “two of the few black coaches in the league.”

Bowles rejected the premise of there being a racial issue and said he had a good relationship with Tomlin saying, “We don’t look at what color we are when we coach against each other. We just know each other.”

“I have a lot of very good white friends that coach in this league as well, and I don’t think it’s a big deal as far as us coaching against each other; I think it’s normal,” Bowles continued.

Bowles then mentioned Steve Wilks, who recently became the NFL’s third black head coach for the Carolina Panthers stating, “Wilks got an opportunity to do a good job. Hopefully, he does it. And we coach ball, we don’t look at color.”

Another reporter asked Bowles, “you also understand that representation matters, too, right?” and went on to ask if he thinks it is good for the players to see an NFL coach who “looks like them” and possibly “grew up like them.”

Bowles was obviously irritated with the question and answered, “Well, when you say, ‘They see you guys,’ and ‘look like them and grew up like them’ it means that we’re oddballs to begin with. “I think the minute you guys stop making a big deal about it, everybody else will as well.”

Earlier this week, MSNBC’s Tiffany Cross claimed there is an “optics” problem in the NFL’s current concussion controversy, that involves race.

Cross was discussing with sports reporter Michael Smith Miami Dolphins quarterback Tua Tagovailoa’s concussion injury which caused him to recently be carried off during the middle of a game on a stretcher.

Tagovailoa suffered two concussions in the span of five days which had Cross claiming that there is a “disregard” for Black lives in the NFL.

“I’ve got to say, Mike, the optics look bad,” she said while Smith nodded. “To see all these Black men crashing into each other with a bunch of White owners, White coaches, and the complete disregard for Black bodies and Black life. I mean, it just represents a larger issue.”

However, Tagovailoa is Samoan, and his head coach Mike McDaniel is of multiracial heritage, having been born to a white woman and a black father.