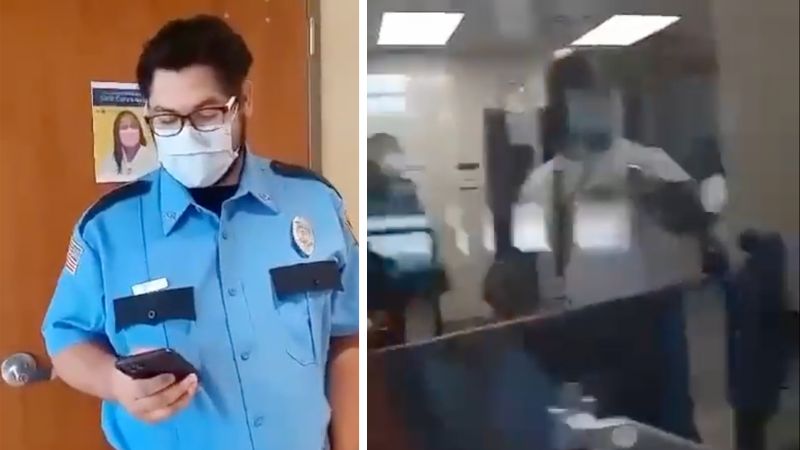 A US military veteran was recently denied service at the West Cobb County VA Clinic after the man said he could not wear a mask due to a medical condition.

Videos posted to Twitter by Rep. Marjorie Taylor Greene show Robby Entrekin being denied access by staff members at the clinic, who also said that he could not film the encounter.

As Entrekin stands with a security officer, he reveals that he has PTSD, and that wearing a mask gives him panic attacks.

“It’s being recorded right now,” Entrekin told the officer, who said that he can’t be filmed. “Cause I’m in here to seek treatment, I just had an echocardiogram, and you’re telling me that I can’t see the doctor because I can’t wear a mask because of my ailment.”

“So now the VA police called on me because I have PTSD, I have panic attacks, I cannot wear a mask, I’m having problems breathing, and so this is how smart our government is,” he added.

Another man in the clinic approached Entrekin off camera and told him, “I went through the same sh*t, I’m not gonna lie.”

The man later added, “I couldn’t even tell you exactly why, I just know that the VA is a lot more stricter about [masking] than the rest of them.”

Entrekin continued on to state that he wishes the VA were more diligent about “finding dead bodies” as they are with masks, noting an incident where a patient at a VA hospital reportedly died in a stairwell and wasn’t discovered until two months later.

Entrekin eventually approached the front desk as the security guard said he needed to have his phone down, and a man behind the desk told the man that he was required to have a mask on and that he couldn’t be recording.

After Entrekin moved his camera back up to reveal the man behind the desk, the security guard placed his hand in front of it, with the female staff member reminding him that he can’t be recording in there, and that he could not place his hands on the security officer.

The man from behind the desk approached Entrekin, demanding that he delete the footage of his face, to which Entrekin turned his phone towards the man, resulting in the man swiping Entrekin’s phone.

VA Press Secretary Terrence Hayes told The Post Millennial, “VA’s top priority is ensuring the health and safety of the Veterans we serve, which is why we request that everyone wear a mask when entering our health care facilities. Of course, we also work diligently to accommodate Veterans who cannot wear a mask for health reasons. We are investigating this incident and will take appropriate action.”

Hayes noted exceptions to their masking policies which include instances where people are alone or eating and drinking, as well as instances where a person cannot wear a mask for medical reasons, giving a reasonable accommodation to the person.

“This veteran was not just poorly treated by VA employees, he was assaulted for exercising his First Amendment right to record in a public space,” Greene wrote on Twitter. “This veteran is also a taxpayer, and no government employee should ever treat a veteran this way.”

“Mr. Entrekin had every right to record, as confirmed by an officer at the Cobb County Police Department, especially when he was being horribly mistreated,” she added. “Veterans should not be forced to wear masks or take COVID-19 vaccines as a condition of service. We must end the mandates.”

In the Veteran’s Affairs’ Covid-19 policies, updated last on October 13, 2022, it states “To help us protect you, other patients, and our staff, we require everyone who enters our hospitals, clinics, and Vet Centers to wear a mask that covers their mouth and nose.”