WATCH: Tucker Carlson exposes board of directors of hospital that ‘transitions’ minors for money 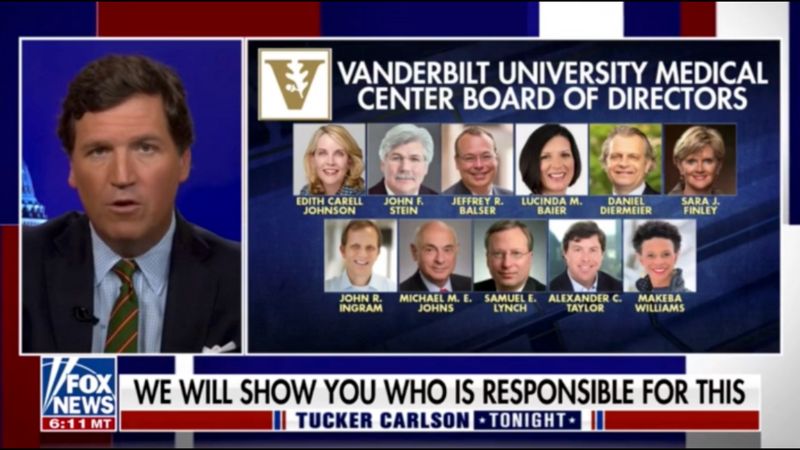 Tucker Carlson on Wednesday named the Board of Directors at Vanderbilt University Medical Center after revelations that the hospital has been performing medicalized gender transitions on minors, procedures Carlson and others have described as “mutilating children.”

Carlson first played a 2018 video of Vanderbilt’s Dr. Shayne Taylor speaking of the profitability of performing transgender surgeries on minors and asked “who should be the backstop against this?” Carlson said, “that would be by definition the Vanderbilt University Medical Center’s Board of Directors. We’re going to name them now in the hope that these people do something to stop these crimes before the lives of more children are destroyed.”

The full segment explained how Vanderbilt has been chemically castrating patients as young as 14 under the guise of gender affirming care. “This is lunacy,” Carlson described before saying the hospital also has been happy to “perform double mastectomies on adolescent girls after they’ve drugged them.”

Carlson’s segment came in response to reporting from Matt Walsh who posted on Twitter on Tuesday, “BREAKING: My team and I have been investigating the transgender clinic at Vanderbilt here in Nashville. Vanderbilt drugs, chemically castrates, and performs double mastectomies on minors. But it gets worse.”

Carlson, who later had Walsh on as a guest, summarized Walsh’s reporting. It started with the 2018 video from Dr. Shayne Taylor who, as Carlson described, “explains that Vanderbilt performs gruesome sexual surgeries on children. Why? Because those surgeries make Vanderbilt money.”

In the video Taylor can be heard saying these surgeries are a “big money maker” especially because they involve a lot of “follow ups.”

“Now, it’s hard to believe that everyone at Vanderbilt hospital could possibly be for this because it’s completely irresponsible and wrong. So what would happen if a physician at Vanderbilt, a conscientious objector, disagreed with mutilating children for profit? That’s a key question,” Carlon said, before playing a clip of Dr. Ellen Clayton of Vanderbilt who said anyone who objects must “realize that that is problematic.”

“They anticipated that this is so horrifying that some doctors might still step out of line,” Carlson explained before saying “Vanderbilt recruited trans activists to bully physicians into submission”

The “Trans Buddies” program was designed to keep doctors in line who might be predisposed to disagree with what Vanderbilt was doing to children. These “enforces” as Carlson described would describe a doctor as “unsafe” if they did not use a patient’s preferred pronouns.