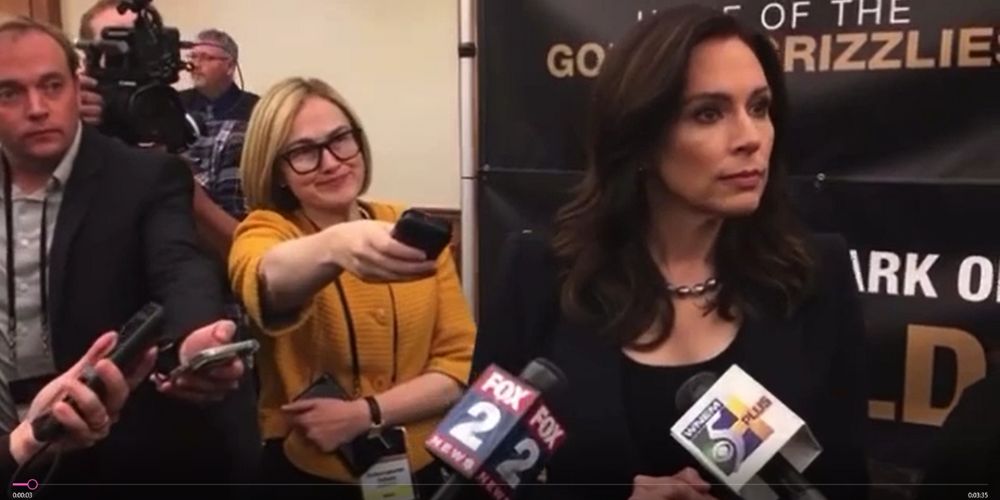 Following the final Michigan gubernatorial debate before the November 2022 election, Republican candidate Tudor Dixon was peppered with questions by the media and calmly but forcefully put on a master class on how to respond to biased reporters.

A reporter with the Associated Press asked Dixon what would have to happen with the Secretary of State for her not to accept the result of the election to which the candidate replied, “I just made it clear that if she runs an illegal election again, that would be a problem. I’m hoping that she won’t do that.”

Last month, a judge ruled that Michigan Secretary of State Jocelyn Benson violated state law last year when she issued “guidance” on how absentee ballots should be evaluated.

A local reporter asked Dixon, “You claim the governor forced people to get vaccines. Can you clarify that comment? Michigan never had a mandate.”

The candidate replied, “I was talking about her ‘VAX to Normal” program that said if we wanted to have our freedoms and liberties back then we had to go to a certain percentage of people that were vaxxed.”

A reporter from the Michigan Daily asked, “Governor Whitmer kind of stressed her record of bipartisan collaboration and I’m just wondering what your plan is to work across the aisle?”

“Yeah, it’s interesting that she talks about that,” Dixon replied, “because there are actually legislators that she’s never met. So, I would sit down with our legislators and meet with them regularly.”

Craig Monger from the Detroit News inquired of Dixon, “Governor Whitmer asked you at one point, ‘do you really think the books are more dangerous than guns?’ You didn’t directly respond to that. What’s your response to that question?”

“I think there are dangers all over for our children. I don’t rank one as different than the other. I wanna make sure our kids are safe no matter what,” Dixon stated.

The next reporter called out Dixon for criticizing “your opponent for failing to fix the roads. So, I’m wondering how you plan to fix it and how you plan to pay for them?”

Dixon acknowledged the question and answered, “Yeah, we’ve talked about this that we wanna make sure that we work with the legislature to get the road funding in there. Look, she had a budget that she’s increased by nearly $20 billion and she wasn’t able to find the money. So, I wanna sit with the, our legislature and work with them to make sure that that is prioritized in the future.”

Anna Pavelski from the Michigan Daily followed up by asking Dixon, “I was wondering if you could clarify what content you would want removed from public school curricula and how that would impact Sex education at schools.”

Dixon calmly answered, “If you’ve been talking to parents, they are concerned about the content that is pornographic in our schools.”

A television journalist asked, “On the issue of criminality and abortion, can you just clarify or give your view of how you would handle that if the 1931 abortion ban does go back into effect, and if people are criminalized for this, what would you do? Because I know you’ve said before that you are not for criminalization.”

Dixon stated matter-of-factly, “You know, this is something that the people will decide and we’ll find out what the people choose and the law is on the books. If that’s the law, then we will see what happens in the… November 8th election.”

One of the previous reporters followed up on the question of books being removed from schools to which Dixon responded, “We’ve been talking about having the ‘Right to Know’ act, and that’s what we wanna see happening is that parents get to see the content. With our parents’ Right To Know act, we would have to post what books are in the classroom library and what books are in the school library and then parents can go and say, I don’t think this material is appropriate.”

Referencing a local case where a book was removed from the school Dixon said, “In the case of Spring Lake, they were able to take that book off the library shelves and say, ‘if we need them to use this, we’ll talk to a parent and say, This is an opportunity for you to use this curriculum or to use this book to talk to your child.’ And that’s how they chose to handle it, and I think that’s appropriate.”