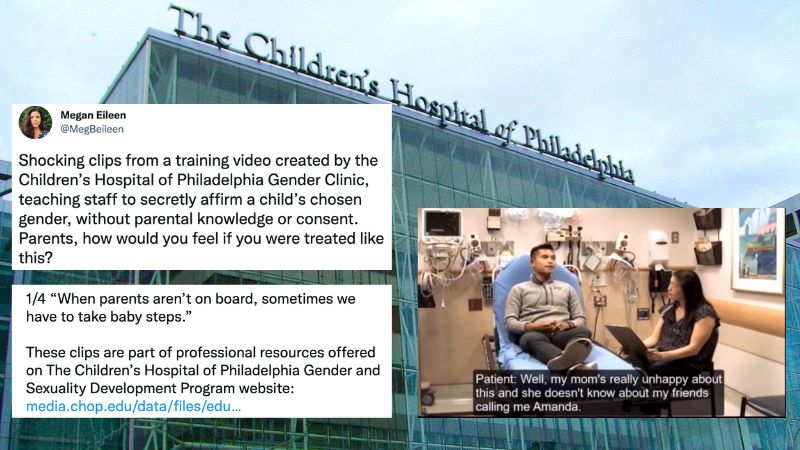 Clips have emerged on Twitter of a training video made by the Children’s Hospital of Philadelphia Gender Clinic (CHOP) teaching staff to secretly affirm a child’s self-declared gender identity and then how to coerce the parents into accepting it.

Megan Eileen uncovered the video while digging into the Professional Resources section of CHOP’s Gender and Sexuality Development Clinic (GSD) and told The Post Millennial she was prompted to do so because the CHOP gender clinic is promoting its trainings in Bucks County Schools.

In the video, which has since been removed from the hospital’s website, a teenage boy has been admitted to the hospital because he fainted. While talking privately with a nurse practitioner, he explains that he is really a girl, and that unbeknownst to his mother, his friends at school call him Amanda.

“I don’t want to look like a guy and I don’t wanna get big, and since my mom won’t help me get hormones, I don’t like to eat so that I’ll stay skinny and more female,” explains the patient.

“That makes a lot of sense,” responds the nurse. “So you’re not eating because you want to look feminine and feel more feminine?”

“Yeah, it’s kind of stupid,” the troubled teen replies. The nurse assures him it is not.

“What made you feel safe enough that you could tell us this today,” asks the nurse. “Well you asked me about my name and my pronouns, and people who know about this stuff know to ask that,” replied the patient.

The nurse then assures her patient that she and her team are going to “come up with a plan to help your mom get on board,” and explains that “when parents aren’t on board, sometimes we have to take baby steps.”

Three staff members then work together to figure out a way to force the mother to allow the teen to transition, without any further investigation into the eating disorder or the reasons for the teen’s gender confusion.

In the next clip, the doctor uses the teen’s real name while the mother is present, asks mom to leave the room, and then switches to using Amanda in her absence. Then the medical team sits down with mom and tells her she has to accept that her son is now her daughter “because that’s how she identifies.”

On their website, the GSD Clinic says it partners “with medical professionals and schools to provide insight and training that will increase transgender competent healthcare and create more supportive school environments.”

A Right to Know Request shows Samantha King of the gender clinic at CHOP saying she has “been begging Bucks County SD (School District) to host trainings.”

In an educational training video created by CHOP, teachers are advised to remove gender language such as the words boy and girl, make access to bathrooms based on gender identities, and that a student’s “gender identity is considered confidential.” Teachers are told that if a student reveals their gender identity “you have to keep that private from other students, staff, and parents.”