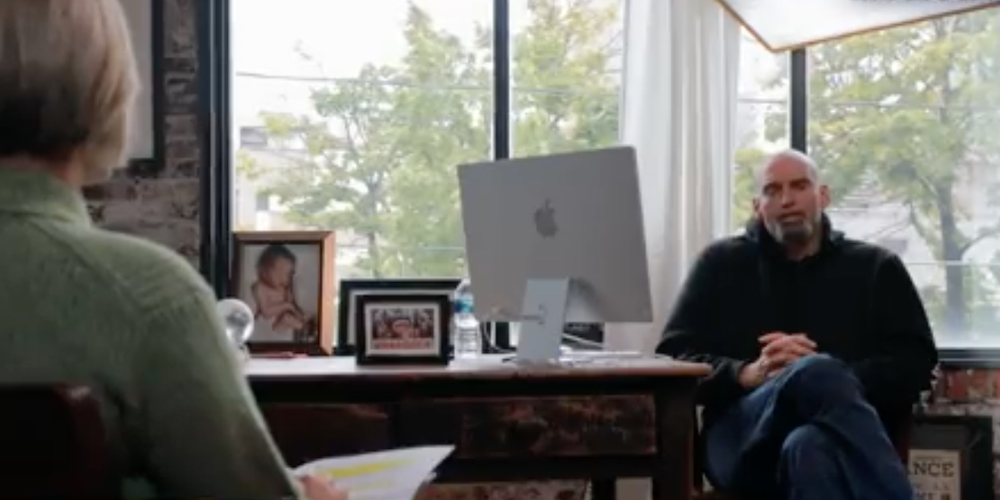 Despite sitting directly opposite Fetterman, Burns was asked by his campaign to deliver questions via closed captioning as well, revealing that he continues to struggle with auditory processing following his stroke.

“No,” she replied. “Because of his stroke, Fetterman’s campaign required closed captioning technology for this interview to essentially read our questions as we asked them.”

Burns went on to explain that while she and Fetterman engaged in small talk before going on camera without captioning, “it wasn’t clear he was understanding our conversation.”

During the interview, Burns pressed Fetterman on his ability to perform the duties of Senator given his health, to which he replied, “yeah of course.”

Burns also pointed out that the last time a physician gave him the all-clear to run was six months ago, and asked why he’s declined to release his medical records since.

Fetterman deflected the question, suggesting that simply seeing him out and about giving speeches and doing interviews should be enough for voters to see that he’s ok.

It appears as though closed captioning will be used by Fetterman going forward, with the technology set to make another appearance during his debate with Republican competitor Dr. Oz on October 25.

“Most of the recovery from a stroke happens in the first three months or so,” Angus said, noting that Fetterman is on month five. He explained that more recovery is “possible,” but it’s not “guaranteed.”

Angus warned that as a result, closed captioning and other technologies that allow Fetterman to use his perfectly intact visual processing system could “be with him for a lifetime.”

Fetterman's wife called the insinuation that her husband was not fit for office “truly appalling,” pointing out that 15 percent of the US population needs accommodations similar to closed captioning.

Others responded by noting that there's a major difference between someone who's hard of hearing and someone who just had a stroke.