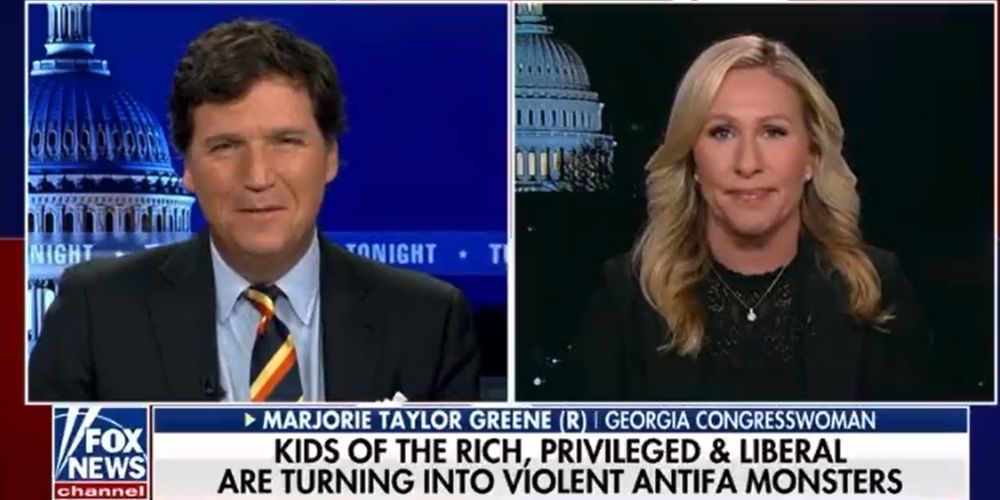 During an interview with Tucker Carlson on Monday night, Rep. Marjorie Taylor Greene pledged to introduce legislation that declares Antifa a domestic terrorist group following the riots that rocked Atlanta over the weekend.

The Republican congresswoman from Georgia told the Fox News host, “America's sick and tired of Antifa.”

“Look at what they've done over years now. Just from 2020, they're responsible for nearly 2 billion in damage and many people dead,” she continued.

“But the war is against the police, and the reason why is because Antifa is the ground troops of the Democrat party. Not only are they the ground troops, they breed them, they raise them, and then they bail them out of jail when they get arrested, but they never get prosecuted.”

“It's the Democrats in control and it's the establishment and it's the unelected bureaucrats that make no apologies for their support of Antifa.”

“Well, it's time to do something about Antifa, and that's why I'm going to introduce legislation to declare Antifa domestic terrorists because they need to be taken apart. We need to investigate exactly who they are, who funds them, and then we need to make sure that whenever they come out and erupt in violence, attacking police officers and attacking businesses in cities like my city Atlanta in Georgia, we need to make sure that they're arrested and charged with domestic terrorism charges just like the GBI [Georgia Bureau of Investigation] did this past weekend.

“Enough of Antifa, they are not the anti-fascists. They are the fascists, and they always show up and they defend Democrat causes.”

“Not only do they attack police, but they defend the drag queens, targeting our children with drag queen storytime. They go after people when they're not vaccinated and demand they get vaccinated and wear masks during the so-called pandemic.

“But enough of Antifa, we've, we've had it with them and it's time to do something about it.”

Carlson replied, “Yeah, that was kind of a tell. I would say ‘this is the anarchist group that's for VAX mandates.' Tell me how that works. Is that in the anarchist catechism?”

“Yeah, just like they are environmentalists trying to stop a police training center,” the congresswoman responded. “We're not buying it.”