WATCH: Man discovers it will take 5 days for his Hummer EV to fully charge 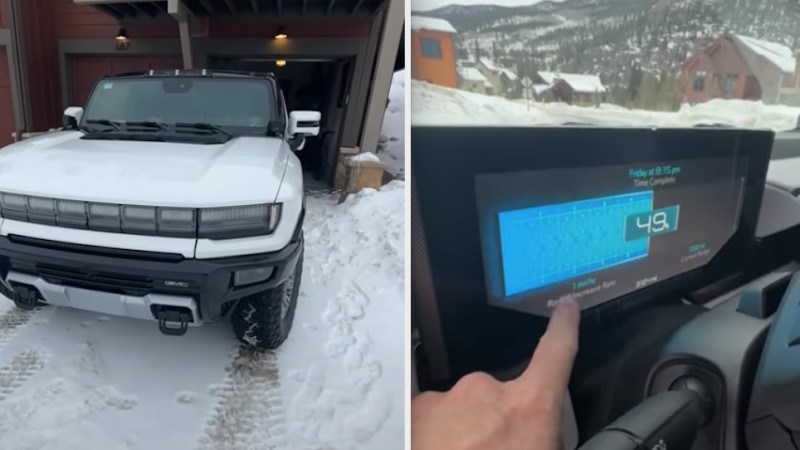 “This is a brand new hummer and it's got the largest battery you can buy,” he announces. “250-kilowatt hours of battery in this truck.”

He continues, “Now it's Sunday morning, let's see how long it takes to charge it just using the truck's charger and plugging it into a standard wall outlet.”

“So, I've got the charger, I've got the plug. Keep in mind it's Sunday morning, so let's plug her in, and let's see what the truck says about how long it will take to charge.”

After plugging in the vehicle, he checks on the dashboard of the car for the estimated time it will take to fully charge.

“Time to complete charge: Friday at 8:30 am and range increase is one mile per hour,” he said, making a total charge time of five days.

“And that's what happens when you try to charge the largest battery truck using a 120 outlet,” he adds, although he does acknowledge that there are ways to fast charge the vehicle to make the charge time a lot quicker.

“Of course, you could have a level two or fast charger which would make it a lot quicker.”

An increasing number of governments are announcing bans on the sale of gas-powered vehicles, including Canada, as well as the states of Wyoming and California. However, some of these same states and countries have also struggled to keep up with the electricity demands of the increasing number of EVs.

California has had to implement rolling blackouts during the summer months in order to allow the state's aging power grid to keep up with demand.

In the aftermath of hurricane Ian, EV owners in Florida discovered that the salt water flooding their cars was causing them to catch fire.