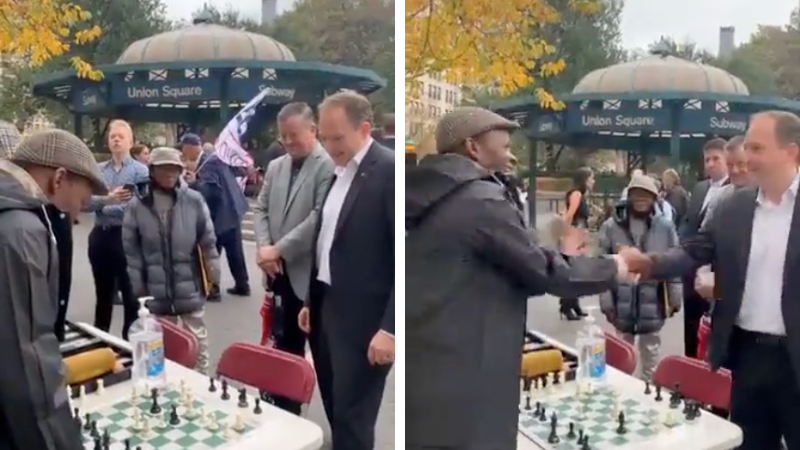 New York Republican gubernatorial candidate Lee Zeldin engaged in a classic Gotham tradition on Thursday when he took on a chess hustler in iconic Union Square Park. Made famous by films like “Searching for Bobby Fischer” this New York scene in parks across the city is peppered with speed chess experts who accept challengers for five, ten, or twenty dollars.

While there wasn’t a wager a stake this time, after a press conference focused on the city and states’ crime woes, Zeldinspent a few minutes playing one of the speed chees master who had his table set up. Zeldin stands while he plays, moving pieces quickly, but without a clock. After a flurry of aggressive attacks, the hustler laughs and says, “Governor, I’m offering you a draw.” Zeldin accepted with a laugh and gregarious agreement.

The classic New York scene took place as Zeldin has been making national noise with a tightening of polls in the gubernatorial race, and a general sense in the Empire State that he might actually win this thing. Eyebrows are raised, and the Republican has also raised millions for his campaign against incumbent Democrat Kathy Hochul in recent weeks.

Zeldin’s official purpose at the Union Square rally and press conference, held with his running mate former police officer Alison Esposito, was to focus on a litany of crimes from the recent murder of a dad in a hotel on a college visiting weekend, to the seemingly unending spree of subway violence.

As if to punctuate the lawless nature of New York City, a few dozen yards from the event was a young man selling pre-rolled joints, openly and illegally on a folding chair in the middle of Manhattan. As Zeldin spoke, a small crowd grew larger, and cheers could be heard when he stressed the need for crime-free streets and a livable city.

After the cameras stopped rolling the candidate wandered over to the chess tables and took on the friendly challenge. With an almost “aw shucks” attitude, he played the bombastic pro and seemed to be doing ok when the draw was offered. Afterewards, there were handshakes all around and a palpable atmosphere of conviviality.

New York City has become a battleground in the governor’s race, with Zeldin saying that if he can get 35 percent of the vote in the nation’s largest city he will be governor. That is the traditional magic number, but no Republican has won statewide office in New York in two decades.

The Zeldin chess gambit may not put him over the top, but it allowed the Long Island native and sitting congressman to show off some chess skills and some sense of the city. Unlike Zeldin’s cocky chess opponent, Hochul will not be offering a draw, but the GOP candidate is playing games in the Democrats’ backyard, and judging by the crowds’ and his opponent’s reaction, they seem to like the guy. Make no mistake, the governor’s race in cobalt blue New York is becoming a tight contest to watch.