WATCH: Chloe Cole tells Drew Hernandez that ‘bimbo’ trans TikToker ‘will never understand what it means to grow up as a woman’ 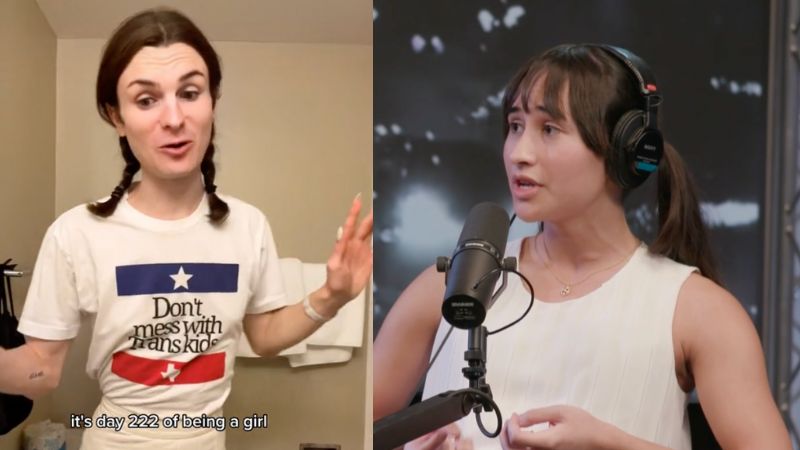 In Wednesday’s episode of Frontlines with host Turning Point USA contributor Drew Hernandez, Chloe Cole, known best for speaking out about her transitioning and detransitioning experience, spoke out against transgender TikToker Dylan Mulvaney.

“It’s — honestly it’s a little insulting that he, like, calls himself a girl, not a woman,” said Cole.

“I’ve always said that this is a clear attack on women,” Hernandez responded, saying that it’s a “bunch of really mentally disturbed males just taking from women, just straight taking their identities.”

Hernandez noted Mulvaney’s visit to the White House to talk with President Biden, saying, “maybe that could have gone to a real woman.”

“One of the things he said was like, it was like, don’t mess with trans kids. He was right about that,” said Cole.

“He was right about that though because you really got to stop messing with the kids and keep them away from like, all the medications and scalpels.”

“What do you think is really going on inside that guy’s head,” Hernandez questioned. “Do you think it’s like, just he loves the attention? Like how much do you think that’s going on?”

Hernandez noted that if a kid in high school comes out as transgender, “you’re popular, you can pop on TikTok like nothing overnight.”

Cole said that there was “a little bit” of that happening, adding, “feeling that kind of validation, like being called the opposite sex and actually being perceived as the opposite sex.”

“Like I said earlier, I passed as the opposite sex and a lot of people genuinely thought I was actually, like, a boy. Like most people didn’t even know that I was transgender… I can’t even describe what the feeling was, it just felt good,” Cole added, saying that “there was a bit of a honeymoon period,” but that it ended for her.

Mulvaney is best known for the TikTok series Days of Girlhood, in which Mulvaney describes being a girl, many times using gendered stereotypes of being a female.

In Mulvaney’s most recent post of the series, day 222, Mulvaney describes being in Washington DC to speak with Biden.

“You know that phrase, ‘I fear I may have girlbossed too close to the sun,’ well that’s how I feel today,” said Mulvaney.

“As silly as I am on here, I’m ready to step up and show that trans people, we’re not going anywhere and that trans kids, they deserve a fighting chance to be their true selves,” Mulvaney added.

Most infamously, Mulvaney referred to female genitalia as “barbie pockets,” and has claimed to be a “bimbo.”