WATCH: Byron Donalds SLAMS Joy Ann Reid for accusing him of being a ‘diversity statement’ for the GOP 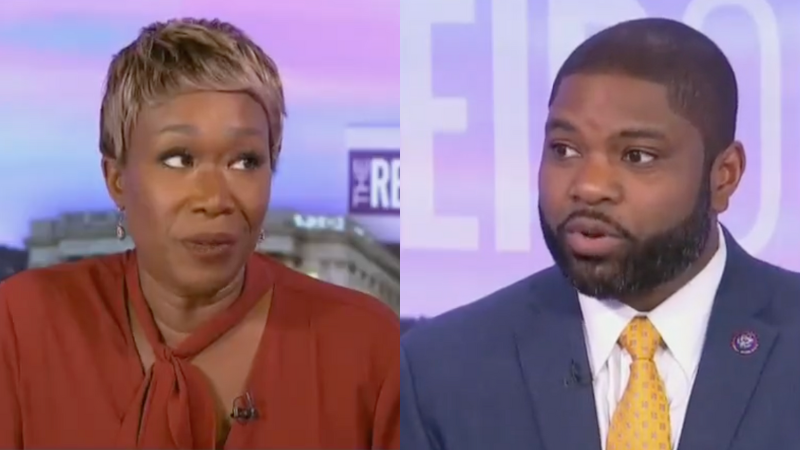 Republican Rep. Byron Donalds on Tuesday responded to claims that he is a “diversity pick” for the GOP, slamming left-wing commentator Joy Ann Reid on her own MSNBC program for her racially-charged insults.

“You got into it back-and-forth with a fellow congresswoman who was critical of the nomination because it definitely looked like they were looking for a response to Hakeem Jeffries in you,” said The ReidOut host, referencing racist accusations made by Democrat Rep. Cori Bush that Donalds is a “prop” for the Republican Party just because he's black.

According to Bush and Reid, Donalds — who was backed by 20 House Republicans in the vote for Speaker before tossing newly-elected Speaker Kevin McCarthy his support — was only supported because the Democrat speaker nominee, Rep. Hakeem Jeffries, was also black.

“No, that was not it,” the Florida representative fired back, before being interrupted by the host.

“Because you've literally been there for one term. So you've never been in leadership. I'm asking you the question…One of the things that I don't know that you said it, but members have said, is that they wanted to highlight the diversity of the conference,” Reid argued. “There are four African American members in… the Republican caucus. There are 56 members in the Democratic caucus. So just, it's more diverse…So do you not believe that the idea was to make a diversity statement by nominating you?”

Donalds is a second-term congressman, and at 44, is among the youngest members of the House.

“Well actually, first, that was not the idea. Because I was in the room when that decision was made by people who chose to nominate me —,” he began to respond, before being cut off again by Reid.

“And you've still not explained how you were nominated and had never been in leadership?,” the MSNBC host asked.

“Let me answer your question. Number two… The reality is, is that a lot of members actually do believe in my ability to lead. They do. Am I to be despised for my youth? Because I've served one term?,” the Florida Republican fired back. “My members know that I have the ability to engage other members to the conference, but it's even bigger than that.”

After 15 rounds of voting, McCarthy finally garnered enough votes to become Speaker of the House, with other prominent Republicans like fellow Floridian Rep. Matt Gaetz and Colorado Rep. Lauren Boebert holding out on supporting him.

“Listen, we were at an impasse last week in our speakership elections. We got that done, Kevin McCarthy is now Speaker of the House. At the same time, I was working with members on both sides of our conference to make sure that we can get the job done and we did and that's the only thing that matters,” Donalds added.

Reid had several other problems with Donalds outside of his race and party affiliation, including his inquiries into the US Department of Defense's (DOD) supposed “wokeness,” as well as his opposition to critical race theory and criticisms of Social Security.

Yet again, he was cut off mid-answer.

“Wait, hold on a second. What are woke policies at the Department of Defense?” Reid asked, as he was attempting to explain.

“Here's what I'm telling you,” the Republican responded. “If there are issues at the Department of Defense that are decreasing recruitment, because the numbers are crystal clear at this point, and we have many members of our military who have complained about some of the programs that are going on at DOD, we have a responsibility to get to the bottom of that.”

In October, it was reported that the US Army failed their recruitment targets by 25 percent, with enlistment plummeting after going “woke.” According to former US Air Force Assistant Vice Chief of Staff Lt. Gen. Richard Newton, 2022 was the “most challenging recruiting year ever.”

Meanwhile, General Mark Milley, chairman of the Joint Chiefs of Staff, was repeatedly pushing the tenets of critical race theory and diversity, equity, and inclusion. Milley came under fire for a statement on “white rage,” in reference to the events of January 6.

“Oh, critical race theory actually comes from critical theory. And essentially, what it does, at the graduate level, it talks about the implications of racial policies in the past in American history, their impact on society today,” Donalds explained to Reid.

“The issue of critical race theory, if you distill it down into K-12 education, is you do not have the ability to have the detailed conversation of critical race theory at the graduate level. And so, here's my question: if it seeps down into K-12 education, is it something that students are not prepared to be dealing with? Shouldn't students just be learning about reading, writing, and arithmetic?” the congressman argued.

Reid's big problem came when Donalds claimed that the US Social Security program will be “insolvent” by 2035.

The host responded by, again, cutting him off and speaking over him by repeating “that is not true,” over and over again.

However, according to the official Social Security website, Donalds is correct — unless Reid only meant to correct the exact year.

“As a result of changes to Social Security enacted in 1983, benefits are now expected to be payable in full on a timely basis until 2037, when the trust fund reserves are projected to become exhausted,” reads a government report entitled “The Future Financial Status of the Social Security Program.“

“At the point where the reserves are used up, continuing taxes are expected to be enough to pay 76 percent of scheduled benefits. Thus, the Congress will need to make changes to the scheduled benefits and revenue sources for the program in the future.”