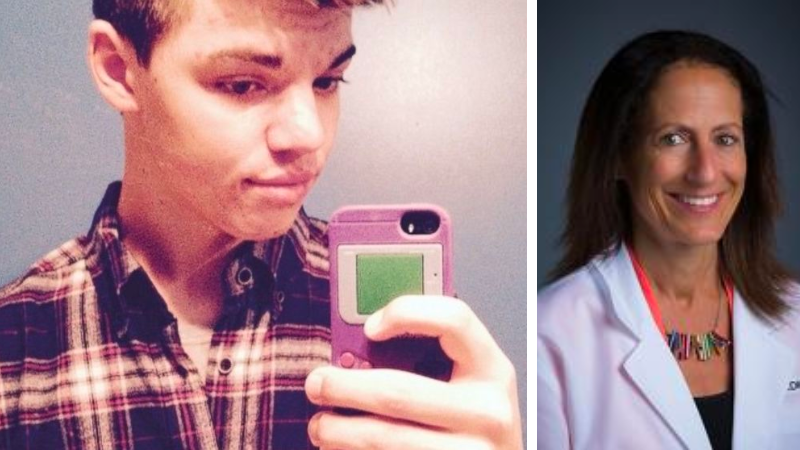 A pediatrician who was present at the American Academy of Pediatrics conference over the weekend in Anaheim, Calif., posted a disturbing video on Twitter in which Alabama gender doctor Morissa Ladinsky delcared that the suicide of a trans-identified teen was a “bold” act.

“And then the final days of 2014, a local 16-year-old young lady, Leelah Alcorn, of trans experience, stepped boldly in front of a tractor-trailer ending her life,” Ladinsky told the assembled crowd of pediatricians. Parents and activists who believe children should be able to grow into adults without drugs to stop that natural development protested outside the conference.

Lidinsky, a pediatrician at UAB Medicine in Birmingham, Ala., lists as her research interests the “impact of faith and community on quality of health for at risk youth including LGBTQ youth living in the Deep South.”

Lidinsky is a proponent of puberty blockers, which can cause brain swelling and blindness, according to the FDA, and permanently stunt growth and the development of secondary sex characteristics, like breasts in girls and the development of the testes in boys. As children grow into teens, she recommends cross-sex hormones, so that girls develop deeper voices, facial and body hair, and boys develop larger breasts.

In 2021, Lidinsky invoked scripture to state that medical gender transition for teens was the compassionate way to treat gender dysphoria, and to buck against the Alabama Vulnerable Child Compassion and Protection Act that criminalized this kind of treatment for minors.

That law barred medical gender transition for minors, including drugs and surgeries, and required educators not keep secret a child's gender transition from parents. The lawsuit to block the Alabama Vulnerable Child Compassion and Protection Act, in which Lidinsky was a plaintiff, was partially successful. A judge put a temporary injunction on the law in May, leaving intact the provision that there would be no surgeries, and no keeping gender secrets about children from parents.

“Her suicide note, written to post on social media an hour after her death, went viral, literally around the world,” Ladinsky said.

That note read, in part, “The life I would've lived isn't worth living in… because I'm transgender.”

“I could go into detail explaining why I feel that way,” Alcorn wrote on Tumblr, “but this note is probably going to be lengthy enough as it is. To put it simply, I feel like a girl trapped in a boy's body, and I've felt that way ever since I was 4.”

“Now Leelah was not my patient,” Lidinsky continued, praising the teen for suicide, “but I took care of hundreds of her classmates at Kings Mills High School. Each day on the way to work I pass that spot where this teen boldly ended her life pleading…”

Dr. Julia Mason uploaded the clip to Twitter after having attended the conference. Alcorn's suicide, Reduxx reports, “came after a prolonged depression and drastically increased Prozac regimen, both of which were related to his self-perception.”

“The FDA states that antidepressants, including Prozac, may increase the risk of suicide in children and adolescents. In a Reddit post made before his death, Alcorn wrote he was taking 60mg per day — which is far higher than the standard recommended pediatric dose,” Reduxx reports.

There has been a drastic increase in the number of children and teens who are prescribed psychiatric drugs. Many of these drugs have not been FDA approved for that age group, many of which have suicidal side-effects.

“After 10 years of confusion I finally understood who I was,” Alcorn's suicide note read in 2014. “I immediately told my mom, and she reacted extremely negatively, telling me that it was a phase, that I would never truly be a girl, that God doesn't make mistakes, that I am wrong.”

“The only way I will rest in peace is if one day transgender people aren't treated the way I was,” the note read. “They're treated like humans, with valid feelings and human rights. Gender needs to be taught about in schools, the earlier the better. My death needs to mean something.”

Alcorn's mother was devastated, saying “My sweet 16-year-old son, Joshua Ryan Alcorn went home to heaven this morning. He was out for an early morning walk and was hit by a truck. Thank you for the messages and kindness and concern you have sent our way. Please continue to keep us in your prayers.”

Of one of her own patients, Lidinsky wrote “Since the first pediatric gender clinic emerged at Boston Children’s Hospital in 2007, medical care models have been improved and refined to uphold health for transgender youth worldwide.” That gender clinic has recently come under fire for providing not only drugs to minors for the purpose of gender transition, but double mastectomies to young teen girls who identify as transgender, and offering vaginoplasty surgeries to 17-year-old boys who identify as transgender.

“Teams like mine,” Lidinsky wrote in defense of her practice, “unite pediatric endocrinologists, primary care pediatricians, behavioral health clinicians and affirming chaplains. This evidence based, guideline-driven standardized care is endorsed by the 70,000-member American Academy of Pediatrics, among several other medical organizations. For decades, we’ve been quietly healing thousands of youth, just like this patient. Slowly, meticulously, helping youth and families become whole.”

Genspect, which advocates for an evidence-based approach to the treatment of gender dysphoria, said “We are very concerned that the AAP is currently representing only one set of views on how best to help our children thrive—namely both social (names, pronouns, etc.) and medical transition (puberty blockers, cross-sex hormones, surgeries), which the AAP refers to as ‘affirmative care.'”

Many have emerged on the other side of medical gender transition with regrets, and have encouraged doctors and the medical industry to reconsider the blanket “affirmation” model of treating children and teens with gender dysphoria. Some detransitioners have said that there are other, underlying conditions to consider, and drastically, irreversibly altering a minor's body should not be the standard approach.