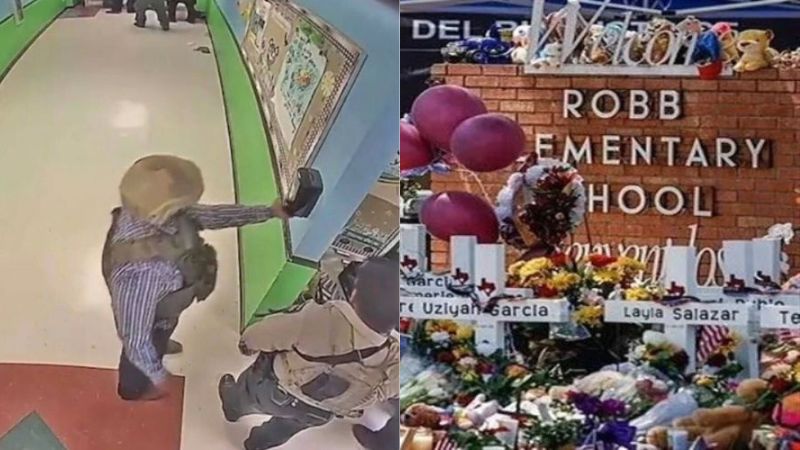 The Uvalde school district in Texas suspended its entire police force on Friday in the wake of their failure to adequately respond to the massacre at Robb Elementary School on May 24 that saw 19 children and two teachers killed.

According to ABC the district released a statement that said their decision had been pending an investigation from the Texas Police Chiefs Association, which “will guide the rebuilding of the department and the hiring of a new Chief of Police,” and the private investigative firm JPPI Investigations who “will inform future personnel decisions.”

The Texas Department of Public Safety will help Uvalde in the interim and place troopers at schools and around events. The district’s statement read, “We are confident that staff and student safety will not be compromised during this transition.”

The man who was put in place to lead the Uvalde school district police after the shooting, Lt. Miguel Hernandez, was put on administrative leave as was the Uvalde Consolidated Independent School District’s director of student services, Ken Mueller.

Mueller responded by deciding to retire.

On Thursday, a former Department of Public Safety (DPS) trooper, Crimson Elizondo, who was then hired by Uvlade was fired. Elizondo was a DPS trooper the day of the attack and was on scene. She was the first DPS trooper on the scene but entered without a vest or rifle.

Elizondo was under investigation along with six other DPS agents for their conduct that day but she resigned DPS and joined the Uvalde school district police force as she thought it would remove her from review.

On May 24, gunman Salvador Ramos entered Robb Elementary School and slaughtered 19 children and two teachers. Ramos entered the school at 11:33 am and police were on the scene in minutes.

As Ramos went to rooms 111 and 112, police did not make an attempt to enter or breach the doors, which were unlocked. Ramos hid in the classrooms and the massacre continued while surveillance video shows officers standing idly by while children screamed only feet away.

Arredondo arrived on scene without a radio but made a call to dispatch at 11:40 am saying “We’re inside the building, he’s in one room,” and “I need a lot of firepower, so I need this building surrounded. Surrounded with as many AR-15s as possible.”

Arredondo proceeded to check for keys that would access the unlocked room and tried a set on an entirely different classroom door safely away from the shooter.

At 12:16 pm, a child was on an emergency line reporting that several kids were still alive and begged for police to enter. In response, Chief Arredondo reportedly said,  “Tell them to f*cking wait“

Outside parents were detained and handcuffed as they wanted to rush in and save their dying children.
At 12:23 pm he was told that they’d already lost two kids, but responded “we have to put those aside right now” because he was afraid that bullets could break through the thin walls. He continued to wait for more gear and men.

The report by the Texas House found that nearly 400 local, state, and federal officers waited outside the Uvalde school as Ramos targeted the children. County Commissioner John Yeackle said that, despite the massive law enforcement presence, “no one seemed to know who was in charge.”

Before Ramos was eventually terminated at 12:50, almost an hour and a half later,  at the hands of a Border Patrol tactical team.

Texas Department of Public Safety Director Steve McCraw summarized the failures of the Uvalde police, especially Chief Arredondo, by saying simply that the gunman could have been neutralized in “three minutes.” The Texas House report also confirmed that Arredondo acted too slowly.