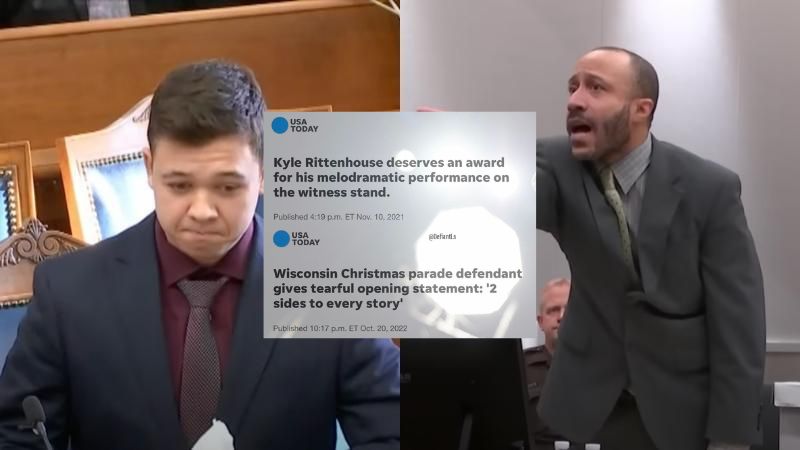 The first story, an opinion piece on the November 2021 trial of then-18-year-old Rittenhouse, is titled “Kyle Rittenhouse deserves an award for his melodramatic performance on the witness stand.”

Rittenhouse, who was just 17 at the time, was armed with a rifle in an attempt to protect local businesses during the Black Lives Matter riots that caused mass unrest in Kenosha, Wisconsin on August 25, 2020. He was chased by three men, who he ended up shooting.

During the trial, the teen appeared to be emotional as he argued that he only acted in self-defense when he fatally shot Joseph Rosenbaum and Anthony Huber and injured Gaige Grosskreutz. If found guilty of first-degree intentional homicide, he faced a mandatory life sentence, according to Fox News.

The USA Today piece, authored by Carli Pierson, not only characterized Rittenhouse's tears as a “melodramatic performance,” but described it as “nauseating” and argued that the “innocent kid act shouldn't fool anyone.”

Nine days later, Rittenhouse was found not guilty by the jury, proving this depiction of him to be false.

In May of this year, Pierson, who is on USA Today's editorial board, maintained her argument that Rittenhouse used “white crocodile tears” to gain sympathy.

The article covering the trial of Brooks, 39, the defendant who is representing himself against allegations that he was the driver of a van that intentionally crashed into Waukesha, Wisconsin's annual Christmas parade constructs a much different story.

Brooks, a convicted sex offender who has had multiple courtroom outbursts as he attempts to deny that he killed six people, including children, and injured 62 others by driving into them, was described more politely as “tearful.”

The article, titled “Wisconsin Christmas parade defendant gives tearful opening statement: ‘2 sides to every story',” by Quinn Clark and Jeanine Santucci, paints a kinder picture of the defendant, who was seen by witnesses driving into parade participants and onlookers.

Under the subhed “Defendant gives emotional opening statement,” the authors described Brooks as “visibly emotional” as he talked about “the impact to the families of victims, the community of Waukesha and his own family.”

“He removed the face mask he has donned for most of the trial so the jury could ‘see me for who I am, no mask.',” the article continued, before quoting Brooks saying that “There’s always two sides to every story.”

One might think that a publication might be a bit more harsh to a person who was caught on video entering the same red SUV before it was driven into the crowd, killing four women, a man, and an eight-year-old child.