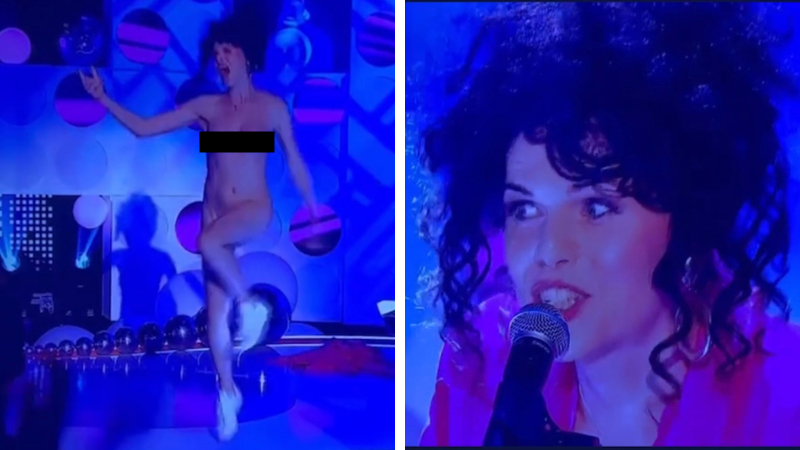 A trans entertainer stripped naked and played piano with their penis on Britain's Channel 4 on Friday night.

Jordan Gray's segment began on Friday Night Live with the comedian, complete with flowing brown curly locks, red lips, and a penchant for spotlight, sitting at the piano singing about being trans, lamenting that Gray hadn't transitioned as a child.

Suddenly, Gray announced that the best thing about live TV is “I can do stupid stuff like this.”
Gray bolted off the piano bench, ripped off pants suit, and stood with boobs and cock dangling, before the adoring, fawning, cheering crowd.

Jordan Gray then ran back to the piano and stood, nude, to bang out the final chords of the song, playing the last notes by taking their penis and slamming it against the keys.

Pink News called the nude show, during which Gray joked about being “more than just a female Russell Brand” and dieting, “an incredibly powerful performance.” Gray was the first trans performer on The Voice back in 2016.

The British crowd appeared to love it. Pink News says “people online were absolutely amazed” by the “iconic performance.” If a woman had taken off her clothes, stood naked, and tried to play piano with her genitals, that undoubtedly would have violated decency standards and been called substantially less than iconic.

Gray is part of Educate and Celebrate, a group that provides LGBTQ+ “inclusion training,” and works with children and teens. The group goes into schools and gets children to chant “smash heteronormativity.”

Actor Jason Isaacs, who made his name in the Harry Potter films as Lucius Malfoy, said that Gray had “show[n] off her magnificent boobs and equally magnificent member, with which she played the keyboard…”

Others called the performance a “f*ck you to transphobia.” British TV has previously altered the testimony of a female rape victim in their reporting, to avoid having the rape victim “misgender” their rapist, who was trans. In print, this meant theyx said that a woman raped another woman with their male genitals.

Still, other biological males who identify as transgender and have Twitter accounts said the set brought them to tears. “I am literally crying happy tears right now. So good to see someone like me just saying ‘f*ck it!' on live national tv!”

Pink News said anyone who didn't like seeing a grown male strip naked on live telivision to flaunt breasts and penis were simply “anti-trans.”

Gray reveled in the controversy, saying “Woke up this morning to the smell of burning gammon. And it is DELICIOUS.” Gray thanked the Channel 4 for allowing Gray to “be a part of comedy history.”

Gray is a big fan of comics, and has said “I'm literally an X-Man.” In March, Gray told The Guardian that cliches about trans people are not part of Gray's act, and that Gray doesn't like when other trans performers lean into this.

Gray's musical career did not take off until after transition. Now 33, Gray explained that Gray was “chopping firewood” on a Swedish ranch when realizing that transition was the way to go, at the age of 24, which puts Gray's transition at about 2013. Gray got into comedy in 2017, after the performance on The Voice.

Only a year after deciding to be trans, “Gray was dressed as a cat, accepting a trophy for best original artist at the Essex Entertainment awards, when she publicly came out as transgender.” Shortly thereafter, Gray staged a show at the legendary Edinburgh Fringe Festival, and stripped naked on stage there, too.

Gray, who is clear that the identifier “comedian” is more important than the identifier “trans,” believes that there need to be more trans people in entertainment. This, Gray believes, is the antidote to jokes about gender ideology.

Gray's transition, Gray told Diva Magazine, “happened basically in front of the nation,” which Gray says was a lucky thing. As for trans rights, Gray says that “There are lots of rights to go round. It’s like the Royal Mint – just keep making money, just keep making rights.”

Many women in the gender critical movement, who believe that sex is innate, biology is real, and no amount of drugs, surgeries or desires can transform a person from one sex into another, found the performance offensive, not iconic.

Others suggested that the nude performance, complete with male genitalia, was a violation of the Sexual Offenses Act of 2003.