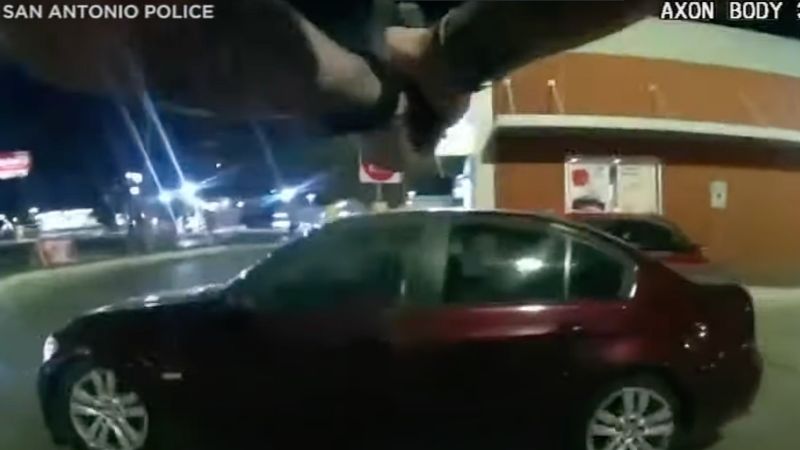 The San Antonio, Texas police officer who opened fire on a teenager sitting in his car and eating a hamburger has been fired as of Wednesday.

ABC reports that San Antonio Police Chief William McManus said, “There is nothing I can say in defense of that officer’s actions that night.”

Body camera footage captured most of the incident from October 2 when officer James Brennand responded to an unrelated incident at a San Antonio fast food restaurant.

Brennan saw a car he believed evaded him the day before. He approached and opened the car door to find 17-year-old Erik Cantu eating his hamburger.

“Get outta the car,” McManus said to Cantu, who then put the car in reverse as it began to slowly move away.

McManus was grazed by the car door.

McManus then grabbed his firearm and started blasting, unloading multiple rounds into the vehicle.

“I think what happened, initially, there was some contact made, but that did not justify the shooting,” Chief McManus said.

Cantu eventually stopped not too far away. A passenger in the car was unharmed but Cantu was taken to a hospital where he was in stable condition.

Police training commander Alyssa Campos said in a statement that officer James Brennand “abruptly opened the driver’s door and ordered the driver out of the car” before backup arrived. Campos added that McManus, who was a cop for less than a year, “violated his training and police procedures after approaching the car,” according to ABC.

Initially, Cantu was charged with evading police and aggravated assault but those charges were dropped.

Bexar County District Attorney Joe Gonzales said, “While Sunday’s shooting of an unarmed teenager by a then-San Antonio Police officer remains under investigation, the facts and evidence we have received so far led us to reject the charges against Erik Cantu for further investigation.”

DA Gonzales did not say if he was charging Brennand adding, “As we do with all officer-involved shootings that result in death or serious injury, we will submit the case to a Grand Jury for their consideration. Until that happens, we can make no further comment on this matter.”