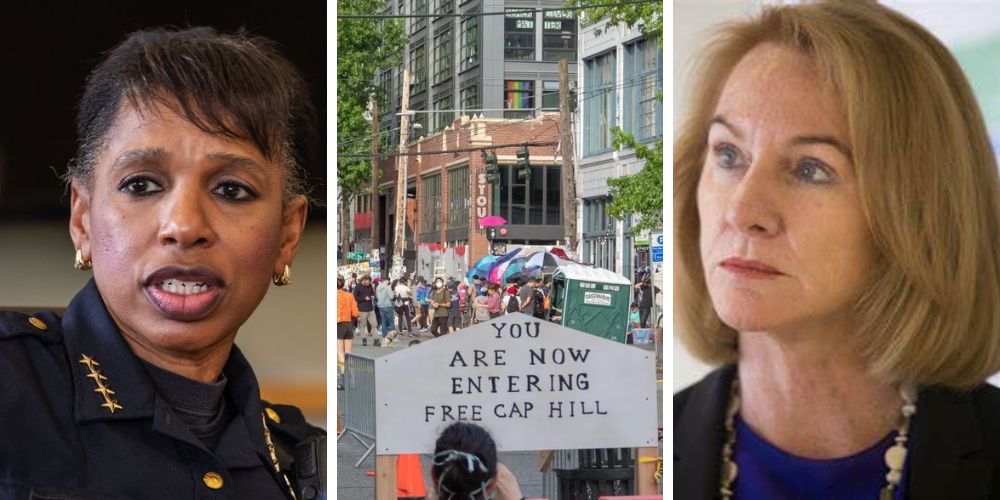 The Office of Inspector General (OIG), which is a component of Seattle’s police oversight and accountability issued a new report Tuesday on the city’s response to the deadly Capitol Hill Autonomous Zone (CHAZ) established after armed rioters seized control of 6 blocks of the city and held them for almost a month during the summer of 2020.

According to the report, SPD officers and community members were upset with the way in which SPD leadership and the Mayor’s Office communicated the decision to abandon the precinct.

The panel issued several recommendations related to the evacuation and abandonment of the East Precinct, which essentially boil down to blaming the Seattle Police Department for not having communicated well enough with either the community or the armed occupiers.

• Addressing the gap between structural and perceived legitimacy and acknowledging the need for SPD and the City to continue to fulfill their duty to provide essential services despite criticism and anger from the community.
• Acknowledging the need for SPD to change its mindset when responding to occupy-style protest movements and to protests where the police themselves are the focus, and to minimize the negative impact of emergencies or civic disruptions on uninvolved community members.
• Improving the ability of SPD to communicate with the public, protestors specifically, and other City agencies to continue provision of essential services during emergencies and civic disruptions.
• Improving SPD tactics during crowd events to ensure appropriate and effective responses to occupy-style movements and understanding how tactical decisions impact community legitimacy and trust.
• Ensuring transparency and accountability by improving decision making and control processes to clearly define authority and responsibility, particularly when decisions will impact access to City services and public safety.
• Establishing protocol to maintain the provision of public services and public safety, even when police precincts or other critical infrastructure cannot be used by the City.

The report identified “53 Contributing Factors” that led to the city’s decision to abandon the police department’s East Precinct, the impact of the CHAZ on residents and local businesses, as well as two fatal shootings inside the zone among other “Critical Incidents” reviewed in the report.

Among the contributing factors regarding the CHAZ, later renamed by the occupiers the Capitol Hill Occupied Protest (CHOP), cited by the 82-page report as part of its Sentinel Event Review (SER) of the Seattle Police Department’s (SPD) response to the 2020 protests were:

• The provision of public safety in the absence of police services
• The provision of other City services to the Capitol Hill neighborhood
• The lack of transparency and accountability in decision-making processes
• Siloed decision making by the City and SPD
• Adaptation to evolving styles of protest movements
• Ineffective communication with protestors and the Capitol Hill community, within the department, and across City agencies.

This is the third of four reports investigating “Critical Incidents” during the protests.

According to the SER panel, it remains unclear which city official actually made the decision to evacuate the East Precinct that led to the creation of the zone. Both former-Mayor Jenny Durkan (D) and former SPD Chief Carmen Best have insisted it was not their decision, however, neither participated in this review.

So far, the investigation has not found any documentation of who participated in the meetings between the Mayor’s Office and SPD on June 7 and 8, 2020.

According to the report, during the investigation, the panel discovered that after a meeting between the Mayor’s office and SPD at noon on June 8, 2020 regarding altering strategies in an attempt to deescalate the ongoing riots near the precinct, the Mayor’s office ordered SPD to remove the barricades surrounding the East Precinct in order to open the street and allow public passage by the building.

However, many on the panel have doubted the credibility of those unconfirmed threats because no specifics had been provided to support the threat. According to the panel, the arson claims increased the lack of trust between rioters, SPD, the city, and residents. Some panelists even believe that the decision to leave the precinct helped deescalate the situation with many believing that the evacuation was inevitable.

An addendum to the June 2020 temporary evacuation plan revealed a directive to remove all officers, weapons, and evidence from the precinct, but return the following day.

However, the officers never returned once the zone was established, and the decision was made to postpone re-occupying the precinct. An SPD Assistant Chief told the Office of Police Accountability, “reestablishing a police presence in the area would require significant planning,” and as a result, the zone remained for the next 23 days.