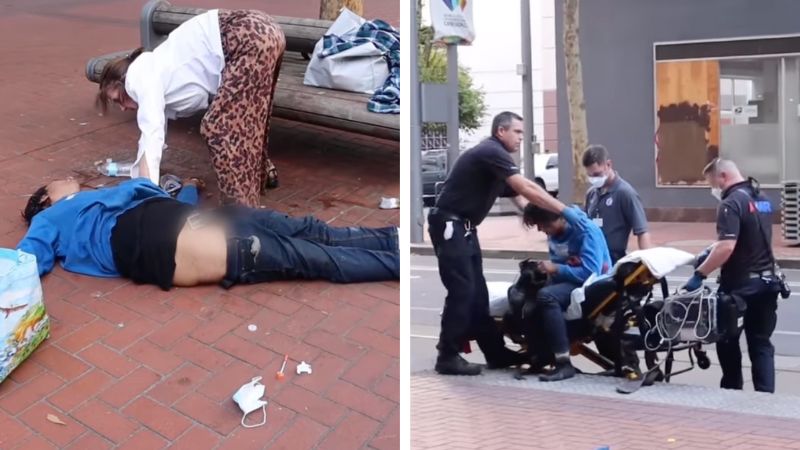 After just two hours of walking through downtown Portland, journalist Savanah Hernandez witnessed an attempted robbery and a drug user being pickpocketed while overdosing on the street.

Within this two-hour span, a homeless man tried to steal from a local business and a drug user was actively seen overdosing on the street of Portland, as the city continues to deal with rampant drug use, crime, and homelessness.

On Monday, in the middle of an interview with a Portland citizen, an attempted robbery took place after a homeless man tried to steal from a local corner store.

The resident who stopped him from stealing shared, “he went in there, he’s got over $1,000 on his food card, he got some energy drinks, but then on the way out he grabbed an ice cream and tried to steal it.” The woman, who said she frequents the shop, ended up chasing the man out of the store and getting the item back.

While the item in question was a simple pint of ice cream, apparently this is a common occurrence for the owner of this downtown corner store. When asked if theft was something that happens often, she stated this happens “almost everyday, everyday a couple times.”

Luckily, this was a minor incident compared to the overdose that would take place down the block just two hours later.

Around 4 pm a man was seen lying unconscious surrounded by exposed needles, while a homeless woman dug through his pockets.

Upon arriving at the scene, the man had his pants down with his genitalia completely exposed. Police were actively on their way during the filming of the video and the man regained consciousness before being taken to the hospital. Officials believe this was a fentanyl-related overdose.

A nearby Portland resident was the first on the scene and immediately called the police. When asked if she had checked the unconscious man for a pulse, she stated she had not, for fear of being stabbed with one of the exposed needles.

These two incidents are a small example of the larger drug and crime problem that has plagued Portland for years.

In 2020, the state of Oregon passed Ballot Measure 110 which decriminalized hard drugs while sending over $300 million to statewide drug addiction services.

Residents and experts have shared that this measure has only exacerbated Oregon’s drug issues by leading to a huge uptick in crime, prostitution, and assault.