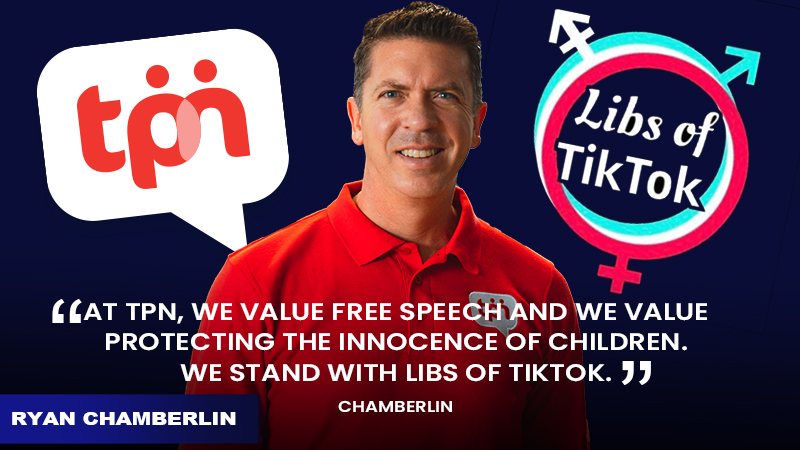 (MELISSA, TEXAS) – News broke this week that Libs of TikTok was banned on Facebook. The social media company apparently made the decision after pressure from employees at the Boston Children’s Hospital, who reported receiving death threats after a Libs of TikTok post.

The Boston Children’s Hospital prides itself as one of the first children’s hospitals in the country to provide transgender surgery and chemical castration services to children. Libs of TikTok simply reposted one of the hospital’s original videos which boasted about providing permanent, life-altering hysterectomies to little girls.

For merely shedding light on the horrific acts of violence taking place in the children’s hospital, Facebook canceled Libs of TikTok.

In response to Facebook’s decision, True Patriot Network founder Ryan Chamberlin stated, “It’s unthinkable that Facebook would stoop to such a level as this. Not only have they aided in covering up the Boston Children's Hospital’s wicked practices, but they’ve placed the blame in the completely wrong place. The video that caused the uproar was created by the hospital.”

Chamberlin went on, “Believe me, I get it – nobody likes to receive death threats. So how about stop mutilating children?”

In response to Facebook’s cancellation, True Patriot Network has extended an open invitation to Libs of TikTok.

“We invite Libs of TikTok to join TPN, the leading alternative to Facebook. At TPN, we value free speech and we value protecting the innocence of children. We stand with Libs of TikTok.”

“For the role Facebook played in this and many other horrific scandals, True Patriot Network is intent on taking them down.”