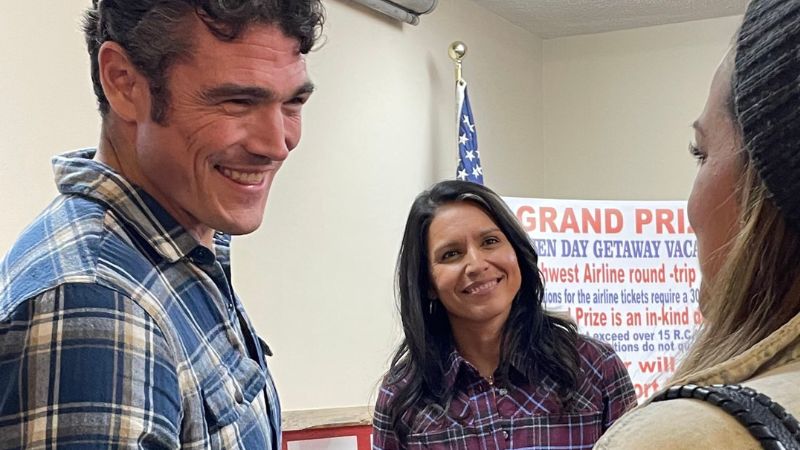 In an exclusive interview, Gabbard told The Ari Hoffman Show on Talk Radio 570 KVI that Kent “is a great American, a great patriot. Someone who has literally dedicated his entire adult life to serving and sacrificing for this country, and I’m so grateful that he is chosen to continue this mission by offering to serve the people of Washington in Congress.”

Gabbard, who recently made headlines for leaving the Democratic party, told Hoffman, “what Joe and I have in common is that we are proud Americans. That’s what matters more than anything else to both of us.”

“In this country right now is the need for us to come together as Americans because our fundamental rights and freedoms, our constitution is under attack by those who are in power.”

“And that’s why I’m here,” Gabbard added. “That’s why I’m urging people here to not only go out and cast their votes for Joe Kent but to make sure they bring their friends and family with them because there is just – our freedom and our future at stake. And I do not use those words lightly.”

She continued, “Joe has shown courage in his own life. He has shown courage in stepping up to serve in public office in the face of horrible attacks coming from both political parties, again, which just shows where his loyalty lies. His loyalty is in continuing to serve the American people. And that’s exactly what we need in Washington, DC right now.”

“There’s a whole lot of empty promises and words flying around Washington, DC, politicians who are looking out for themselves, putting themselves in their own selfish ambitions first, which is why the country is in the state that it is today.

“We’re just driving around this state, we’re seeing gas almost $6 a gallon. People are having to make really hard decisions about, you know, what groceries they can afford to feed their kids, and how far they can drive on the limited money they have to fill the gas tank.”

“This is the United States of America, not some third third-world country,” said Gabbard. “Our leaders have failed us over and over again. The irony is these are the very same self-serving politicians who are trying to smear Joe’s character and called into question his motives when he has done more to serve this country than any one of them on any given day of the week. It’s why as we debate different issues, as we look and look to find solutions, we need leaders like Joe Kent in Washington, DC who will courageously and always speak up for the American people and the people of his district.”

Hoffman asked Gabbard if after gaining so much national attention she would be seeking national office. Gabbard replied definitively, “No, it’s not something we’ve been thinking about. The stakes of this election happening here in just over two weeks are critical. That’s 100 percent where I’m focused.”

She added, “I’m gonna be out on the road campaigning for other great Americans who are going to Washington with a singular mandate, and that’s to fight for the people of this country. We must have a check on the power of this administration and the radical agenda that they’re trying to impose on all of us.”

“If we don’t, if we’re not successful in this, I’m deeply concerned about what kind of country we’ll be living in just a few months or a year or two years.”