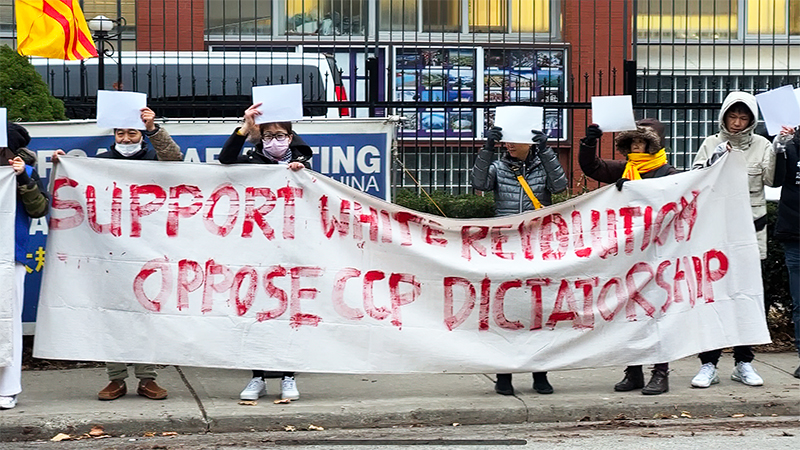 Protestors gathered outside the Chinese consulate in Toronto on Tuesday to stand in solidarity with the people of China as they push back against Xi Jinping's tyrannical “zero COVID” policies.

The group, many holding blank pieces of paper which have become a symbol of the numerous protests occurring in China, changed slogans including “Step down Xi Jinping!” and “Communist Party step down!”

Organized by the group Democratic Party of China, Juntao Wang said that the people of China don't want the dictatorship of Xi Jinping to continue, or the zero COVID policy. “People suffer from such a policy. Many people died for such a cruel policy.”

He noted that the people of China can't voice their ideas, so they were there to give voice to their situation.

Gloria Fung from Canada-Hong Kong Link spoke of how across China, “People have come forward to say no to the restrictive zero COVID policy.” She said the white paper “is a strong symbol of defiance” and “represents all they cannot say in China.”

Among those present were Dominic Cardy, an MLA from New Brunswick. “A free world for all peoples to live, in equality and justice without the tyranny of Chinese communism to kill, to oppress, and to silence through fear. We are here to say no more!”

Hugh Yu mentioned how Trudeau was largely silent regarding the Two Michaels and urged Trudeau to speak out in strong terms. “Be brave! You are the leader of Canada,” he said.

“We're going to continue to ensure that China knows we’ll stand up for human rights and we'll stand with people who are expressing themselves,” Trudeau added. “We also need to make sure that China and places around the world are respecting journalists and their ability to do their job. We will continue to make that very clear.”

Wester Yang said that the protesters weren’t there only for China, but for Canadians as well, who saw push back from Trudeau's government when they protested Canada's lockdowns and Covid restrictions with a Freedom Convoy protest staged by truckers in Ottawa in early 2022.

Many of the recent protests were spurred by the deaths of at least 10 people in a Urumqi apartment building fire, which had been sealed shut by CCP officials to prevent the spread of COVID. Under China's strict “zero-COVID” policy, anybody who tests positive for the virus must be separated from all non-infected people with no exceptions.