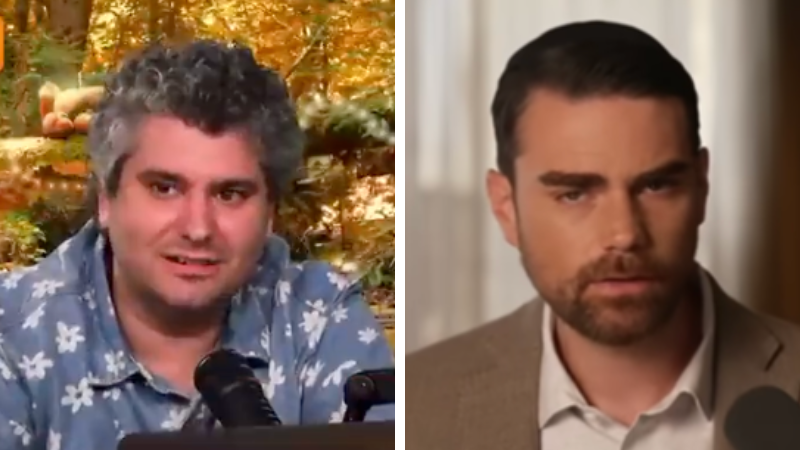 Prominent liberal YouTuber Ethan Klein told viewers on that he hopes, if there's another Holocaust, Ben Shapiro “gets gassed first.” Shapiro is a fellow YouTuber, and founder of The Daily Wire.

The clip, shared on Twitter, shows Klein saying “I was just gonna say if there's another Holocaust and people start this I just say if we start rounding up the Jews again, I hope Ben gets gassed first.”

Klein, who is so progressive that he called for the bombing of an NRA conference, also deleted interviews he'd done with Jordan Peterson.

“Years ago I interviewed Jordan Peterson before I was very familiar with his politics,” Klein said, “he was an interesting guest who I enjoyed sitting with. But, especially now, I can see he's a dangerous gateway to the alt-right, transphobia, and covid misinfo. I removed both interviews today.”

Klein had previously referred to Shapiro as “a hateful little bitch.”

This after Shapiro had defended his colleague Matt Walsh's attack on Fox News for having run a puff piece on a California, trans-identified teen. “We have to call this evil lunacy out wherever we see it,” Walsh said.

Shapriro had said that “This would be absolute despicable insane lunacy if I saw it on CNN or MSNBC. To see it on Fox News is a complete betrayal of anything remotely resembling conservatism or decency.”

In response, Klein said Shapiro was “a hateful little bitch.”

Now, Klein has called for Shapiro to be “gassed,” just as so many Jews were during the Holocaust in World War II, where German leader Adolph Hitler engaged in mass genocide on the basis of race and religion.

Klein also lashed out at Joe Rogan, criticizing Rogan's health choices desite being obese himself. “Joe Rogan, who lives on elk meat, egg yolk, and human growth hormone, with lungs full of tar, thinks he's healthier than everyone,” wrote Klein on Twitter. “This mfer is such a bitch that when he got covid he threw ‘the kitchen sink at it' – if youre so healthy just ride it out like you say a man should.” [sic]

It's unclear what action, if any, YouTube will take after Klein called for the death of Ben Shapiro.