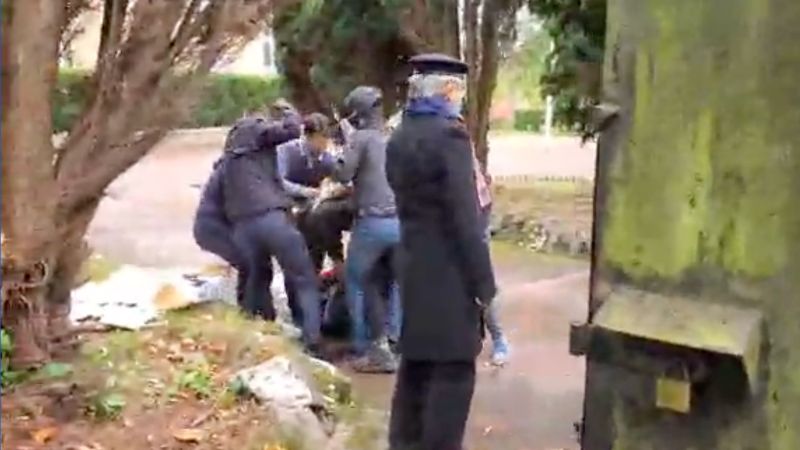 During a pro-democracy protest at the Chinese consulate in Manchester, England on Sunday one vocal critic of the CCP named Bob was yanked inside the consulate gates from the street, which is UK sovereign soil, and then beaten by a gang of men until rescued by British police.

According to the BBC, Bob said, “they dragged me inside, they beat me up,” adding “It's ridiculous. They [the attackers] shouldn't have done that. We are supposed to have freedom to say whatever we want here [in the UK].”

Bob and a few other protestors were attacked by a gaggle of men who emerged from the consulate. Those men said they found some of the posters of the protestors insulting to the likeness of Xi.

The protesters “hung an insulting portrait of the Chinese president at the main entrance,” said the Chinese consulate.

Some of the pro-CCP men were wearing protective vests and helmets.

After Bob was pulled inside a UK police officer did enter despite the fact that he technically needed permission from the Chinese.

“Officers were present and responded immediately to defuse the situation,” said a Greater Manchester Police spokesperson. “Enquiries are ongoing at this time to understand the full circumstances.”

The Foreign Office said it was looking into the matter and the prime minister's official spokesperson said, “I understand Greater Manchester Police responded immediately to the incident and I am conscious their inquiries are ongoing so it would be inappropriate for me to comment beyond that.”

The Chinese consulate said, “This would be intolerable and unacceptable for any diplomatic and consular missions of any country. Therefore, we condemn this deplorable act with strong indignation and firm opposition.”