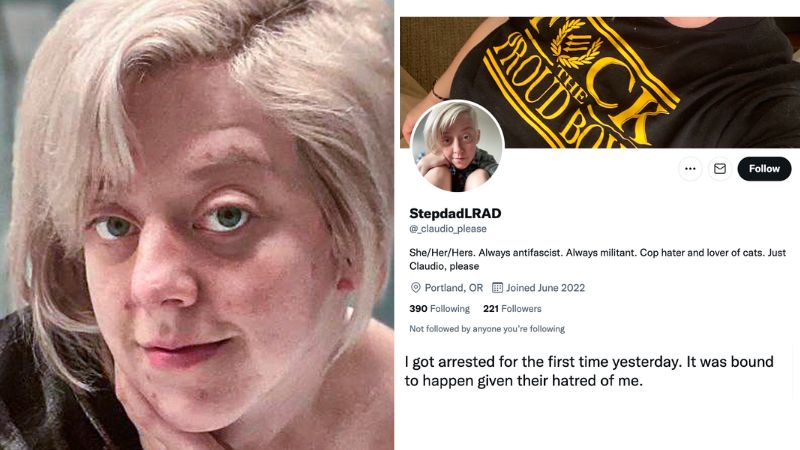 Melissa Alexandra “Claudio” Lewis, a member of Portland Antifa who targeted Andy Ngo with a frivolous lawsuit in 2021, was arrested on Thursday for criminal mischief and carrying a concealed weapon after she punctured a police officer’s car tire, and was then quickly released without bail.

Post Millennial editor-at-large Andy Ngo broke the news on Twitter and said that Lewis “was one of two #Antifa members last year who filed a frivolous lawsuit against me that generated press but was withdrawn after a few days. They made the bogus claim that I owed them hundreds of thousands for retweeting their tweets.”

“Portland #Antifa member Melissa Lewis has turned to filing frivolous lawsuits to get an easy settlement. Before failing in suing me, she sued the mayor, ex-DHS head, Portland Police & others claiming her disability rights were violated at riots. The suit was laughed out of court,” Ngo wrote.

Concerning her October 13 arrest, Lewis wrote, “I got arrested for the first time yesterday. It was bound to happen given their hatred of me. John Oliphant  showed up to gloat, specifically. He pulled my legal mace and baton out of my purse, and told the other officers, ‘This just made my day a whole lot better.'” Oliphant is a Sergeant in the Portland Police Department.

In a statement to The Post Millennial, Portland Police said of the incident, “October 13, 2022 at 5:31 pm. Officers learned that a suspect had punctured the tire of a marked Portland Police vehicle that was parked and unoccupied in the 100 block of NW 3rd Avenue. Officers located Melissa A. Lewis, 32, and arrested her at NW 4th/Everett. She was booked into the Multnomah County Detention Center on Criminal Mischief in the Second Degree.”