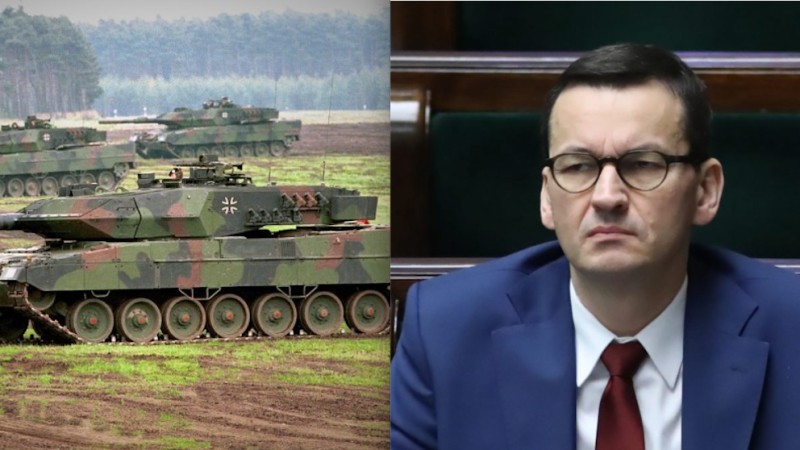 Poland has stated that it is ready and willing to send German-made Leopard battle tanks to Ukraine with or without Berlin's approval, pressuring Germany to change its policy that the US must send American-made tanks to Kyiv before allies do the same.

Polish Prime Minister Mateusz Morawiecki told private broadcaster Polsat News on Wednesday evening that he hopes that Germany will change its mind and allow for Ukraine's European neighbors to help in the fight against Russia regardless of what Washington does.

Officials from 50 countries will meet on Friday at the United States' Ramstein Air Base in Germany, to discuss a new military package for Ukraine, the Wall Street Journal reports. It is expected that Washington will provide Stryker armored fighting for the first time.

Morawiecki said that Poland has 14 Leopard tanks to give, which it would like to donate in concert with other allies who have tanks they're willing to spare, such as Finland and Denmark. However, Berlin reiterated on Wednesday that consent would not be given at this time.

“Consent is a secondary issue. Either we will get this consent or we ourselves will do what must be done,” Morawiecki said. “We have agreed with our Ukrainian friends, as well as with partners from Western Europe, that we will transfer these tanks together.”

It is quite common for countries to impose rules on other states that purchase their military equipment, as Germany had done.

There is a renewed urgency among European allies to provide Ukraine with heavy combat vehicles in order to reclaim some of its Russian-occupied lands, fearing that Putin will remobilize Russian troops and renew his military offensive come the spring.

German officials have expressed hesitation to arm Ukraine too heavily out of fear that they may escalate the conflict, whereas Poland believes that robustly arming Ukraine is the only way to secure European peace.

“We have no doubt that Russia is dangerous, that Putin has decided to recreate an evil empire. That is why it attacks neighboring countries,” Morawiecki said, warning that “If Putin conquers Ukraine, he will not stop, he will go further.”