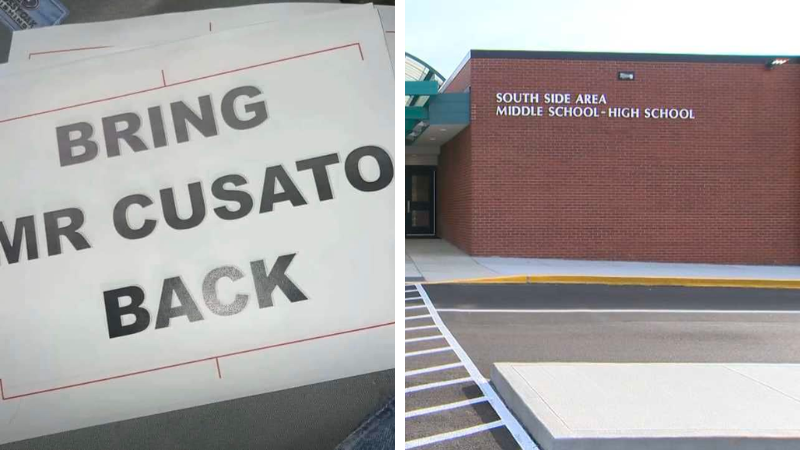 A Pennsylvania public school district in Beaver County has reinstated a teacher who was placed on administrative leave from his position for refusing to recognize a now-suspended policy requiring staff to use transgender students' preferred pronouns.

South Side School District (SSSD) high school anatomy and biology teacher Daren Cusato was placed on suspension last week following his refusal to comply with a newly-introduced policy that required school staff to refer to students with pronouns that may not align with their biological sex.

Cusato's family members said that due to his Christian beliefs and knowledge of biology, he could not in good conscience follow the policy.

“Daren was put on administrative leave today for standing up for the truth in this identity confusion that has come to South Side,” Cusato's aunt wrote on her Facebook page. “Daren has taught for 30 years in this district. He is a Biology, Anatomy and Physiology teacher. He has been a Christian his entire life.”

“… When he was ask[ed] to comply with this new standard on his 31st year, he refused. A district email was sent for this new mandate to use proper pronouns. Daren replied to the email, explaining that he will not participate in this. Although he loves the students, he will not encourage their confusion as a Christian or a bio teacher.”

According to the post, the district staff found it inappropriate that Cusato responded to their policy using arguments from Bible verses and the US Constitution.

“He stated his reasoning, referencing Bible verses, as well as declaring the infringement on his first amendment rights. The response was a letter of notice that he inappropriately communicated with district staff. He was placed on administrative leave and is not permitted to communicate with ANYONE in the district…This is a stand to protect our children and the truth,” his aunt wrote.

Cusato's family weren't the only people who voiced their concerns with his suspension, with more than 400 people packing into the SSSD's auditorium in Beaver County Wednesday evening. According to a local WPXI report, the majority of people in attendance were there in support of the teacher.

Over 40 people spoke at the meeting, most of them arguing for Cusato’s reinstatement.

“I am standing up here tonight to ask you to separate these two things: the very divisive but trendy topic of pronouns and the precedent that you are setting, which is that teachers need to modify their engagement of students based on how that student feels,” one person said, addressing school board members.

One woman criticized the district for acting in what she called a fear of “getting sued.”

“We shouldn't be afraid of being sued. Fine. If you want to sue us, sue us. Let's take it to the Supreme Court. Let's take it all the way,” she said.

Cusato's niece also spoke up at the meeting.

“My uncle Daren is standing up for what is right, even though he is standing by himself. I am thoroughly embarrassed that South Side School District has taken this arbitrary stance in choosing to align with the one percent,” she said.

However, not all were in favor of Cusato's exercising of free speech.

“If we allow a teacher, particularly one with a highly-regarded reputation, to model that these children don’t deserve acknowledgement of who they are, then the children we are trying to protect are in even greater danger,” another woman said at the gathering.

In the end, the majority got their way, with the SSSD letting Cusato go back to work, and suspending the pronouns policy, reported Local 12.

The board reportedly plans to write a new policy on the subject at a future meeting.

Pennsylvania Rep. Stephanie Borowicz, a Republican, took notice of Cusato's reinstatement, decrying the fact that he was even suspended in the first place.

“He should have NEVER been fired. Unreal times we are living in,” she wrote in a Facebook post.

Cusato gained a great deal of support on Facebook, with posts called to “Bring Mr. Cusato Back.”