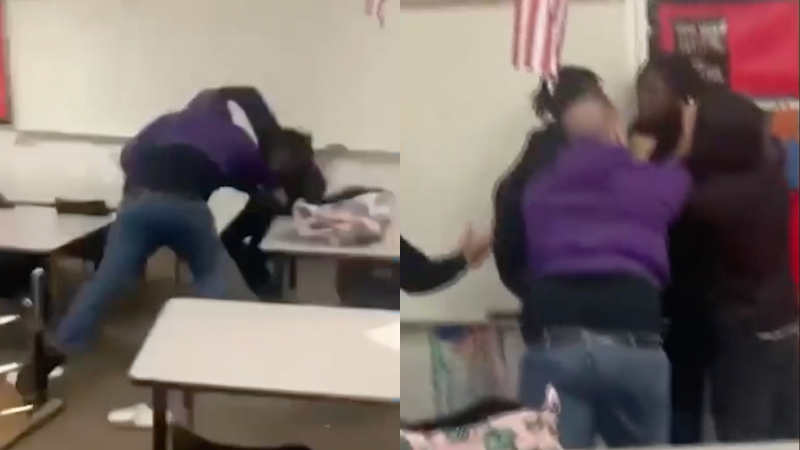 A Texas high school teacher has been placed on leave amid an investigation into a physical altercation between him and a student that resulted in the teen having to go to the emergency room, with the father calling for his arrest.

Cell phone footage captured by another student appears to show the teacher tackling a 10th-grader over a desk and shoving him up against the classroom wall. As the teen appeared to resist and attempt to escape his grasp, the adult forcefully pinned him back by gripping both of the boy's shoulders. It took multiple other students pulling to pry the two apart.

The troubling occurrence took place at Humble Independent School District's (ISD) Humble High School, reported ABC13. The family of the unnamed student as well as a school district representative both spoke out against the actions taken by the educator.

“I don't want this teacher to be able to teach nowhere in this state, or in this country for that matter,” father Elvert Bolden told the outlet. “To be able to go somewhere and be able to have that opportunity to do this ever again.”

“If he would've struck that teacher like he should've or needed to do in being in a situation like that after being slung across the room, they would've had him in handcuffs,” Bolden said of news that the unidentified teacher would be placed on leave.

According to the Daily Mail, Bolden's son was left limping, bruised, and on crutches after the beating, all because he was being too loud.

The teacher “stayed in [my son's] face, antagonizing him,” the upset father said. “My son told him ‘You told me to be quiet. I'm not saying nothing else' and that's when I was told the teacher snatched the chair from up under my baby.”

“I want him arrested, charges filed. I want his teacher's license revoked. I don't want him to be able to go to any school in any state and be able to teach another child in the event he may do this again.”

In a statement to Click2Houston, Bolden said it's not about race.

“I don't want another student to feel the way my baby felt. May he be white, Black, Hispanic, or Asian. It does not matter to me.”

“We're just waiting on my son to feel comfortable with coming back [to school]. We don't know if he's going to stay at the school or if he's going to go somewhere else,” the father said. “That's up in the air right now,” he added.

The student's grandfather, who drove eight hours overnight from Arkansas to be there for his grandson, also shared his thoughts on what happened to his family member at the hands of the teacher.

“We're not just flapping our lips and saying nothing like James Brown said. We're going after him with legal actions,” said Dr. James Bolden.

Humble ISD told ABC13 that after the investigation is closed, it is “unlikely” that the teacher will return to Humble HS.

“This should not have happened. It is unacceptable. The teacher has been put on leave. An investigation is underway, and it is unlikely he will be returning when the investigation concludes,” a district spokesperson said.

“On January 11, 2023, the teacher was helping out in another classroom when he used physical force to try to get a student to take a seat and listen. These actions are unacceptable and contrary to standards and expectations for all employees. The district has a process for addressing serious concerns, which includes reporting to law enforcement and full cooperation with any law enforcement investigation. Humble ISD Police are investigating,” the statement reads.