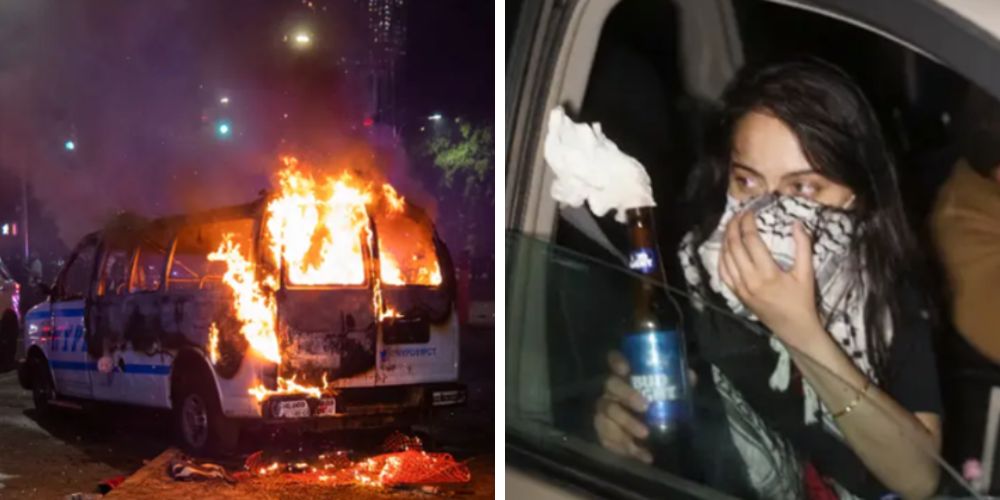 A lawyer who lit an NYPD van on fire during the George Floyd riots of 2020 in New York City with a Molotov cocktail is claiming that she was drunk and dealing with “unprocessed trauma” from being a Muslim in post-9/11 America at the time of the crime and as a result deserves a reduced sentence.

She was convicted in May. The original indictment included a 40-year mandatory minimum count for Urooj Rahman, 33. According to court documents obtained by the New York Post, Rahman, who pleaded guilty last year to tossing a Molotov cocktail at an empty police van in Brooklyn, is facing 18 months to two years in prison.

She is now angling to have her sentence commuted to time served. She previously spent 28 days in a Brooklyn federal jail before posting $250,000 bail.

In a September 9 court filing her lawyers claimed that Rahman had been drinking vodka “on an empty stomach” and “became quite drunk” before she and fellow lawyer Colinford Mattis, 34, set the van on fire near the 88th Precinct stationhouse in Fort Greene on May 30, 2020.

Her lawyer wrote to Brooklyn Federal Court Judge Brian M. Cogan, “Tossing the Molotov cocktail was a way of expressing anger at those police officers around the country for whom black lives did not matter. It was an act of protest intended to avoid exposing others to harm.”

Rahman’s lawyer listed other excuses including, the Post reports including “‘early trauma' from being a Muslim in post-9/11 America; ‘abusive partnership relationships'; and ‘the injustices that she has witnessed here and abroad,' including assisting refugees in Istanbul and Athens and helping low-income tenants in New York avoid eviction.”

The attorney also claimed the incident was “a marked deviation from her otherwise exemplary life,” adding that she has been in therapy and attending Alcoholics Anonymous meetings since she torched the vehicle.

Prosecutors rejected her excuses and told the judge that Rahman should get a harsher sentence because the attack with Mattis happened in the middle of an active protest, and they made at least two explosives, one of which they offered to someone nearby to throw.

Additionally, approximately 45 minutes before Rahman torched the van, she sounded sober in a video interview with Loudlabs News NYC. She defended the protesters and said, “people are angry because the police are never held accountable.”

Rahman and Mattis were facing up to 10 years in prison after pleading guilty to conspiracy to commit arson and to making and possessing an unregistered destructive device in October 2021 to the firebombing. However, under a revised agreement reached in June, prosecutors said they would seek sentences of 18 months to 2 years in prison.

Rahman is scheduled to be sentenced in November.