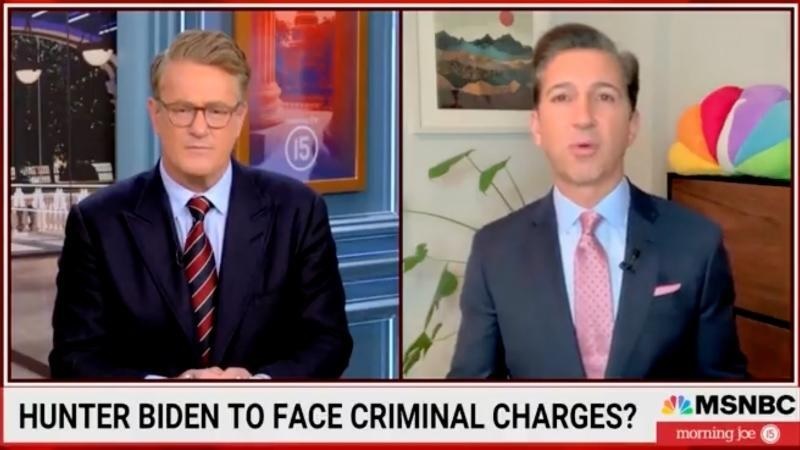 NBC justice and intelligence correspondent Ken Dilanian joined MSNBC Friday morning to speak on the speculations that Hunter Biden may be criminally charged on tax and gun offenses. When referencing potential corruption charges in relation to the younger Biden's questionable dealings in China and Ukraine, Dilanian contested that because he wasn't an elected official, “it was perfectly legal for him to take money from foreign governments, as long as he wasn't inappropriately giving them information from his family.”

According to a Thursday report from the Washington Post, the FBI has gathered what they believe is “sufficient evidence to charge him with tax crimes and a false statement related to a gun purchase.” Sources said that the next step is for the US Attorney in Delaware, David Weiss, an appointee of former President Donald Trump, to decide on whether to file charges against the current president's son.

On MSNBC's “Morning Joe,” host Joe Scarborough asked Dilanian what he had been hearing on the federal government's case on Biden, 52.

“The feds are pretty confident they have an open and shut case against him. Is that what you're hearing?” Scarborough questioned.

“That's the reporting. Actually we at NBC News, we tried very hard to talk to people familiar with the case, we would neither confirm nor deny this Post report,” Dilanian began. “But, as you know, Joe, I mean, tax cases are not all that difficult. He paid a $2 million tax bill last year, so he was in arrears on his taxes.”

According to a May New York Times report, Biden had help from wealthy Hollywood attorney Kevin Morris to pay off his millions in overdue tax dollars.

Morris reportedly loaned the recovering addict over $2 million to support his family and pay back delinquent taxes amid a federal investigation into his tax affairs, the Times reported, citing four anonymous sources familiar with the matter.

“The question with those cases is always when does it become criminal tax evasion, and there's a lot of prosecutorial discretion about that. There's a lot of people who evade taxes who are never prosecuted criminally. So that's going to be a big issue in this case,” Dilanian continued.

“In terms of like, corruption, conflict of interest; we've never heard a hint that there were potential criminal charges there. Because Hunter Biden wasn't an officeholder, it's perfectly legal for him to take money from foreign governments as long as he wasn't inappropriately giving them information from his family or something. There's no hint of that, as bad as it looks.”

Despite him not holding a government office, Biden's dealings during his father's tenure as vice president and the subsequent cover-up of the discovery of his laptop are still being called into question, especially how it relates to the results of the 2020 presidential election.

According to a former business partner of the president's son, the FBI “altered history” by suppressing the laptop story, depriving Trump of votes that he may have otherwise received.

In an interview with Fox News' Tucker Carlson, former Hunter Biden associate Tony Bobulinski said “The difference between President Trump and Joe Biden was 43,000 votes. If half of those people, 21,500 had voted for President Trump instead of Biden, President Trump would still be in the White House.”

“So that election was decided by 21,500 votes – in the backdrop of a story that is the most suppressed story in the history of the US presidential elections,” he argued, before adding “I'm coming out now because the American people still are being lied to about the facts. Nothing's been done.”

Bobulinksi claims that he was defrauded by the Biden family, alleging that Hunter Biden stole money from Oneida, the firm he launched and owned with the president's son and brother, Jim Biden, and others. Oneida formed a joint venture with CEFC, a Chinese firm.

According to Bobulinski, Hunter Biden copied the contract and stole money, diverting $5 million into his own pocket.

“It appears that Hunter Biden, Jim Biden, and the Biden family really copied the same document down to typos [and] the serial number and they removed [the name] Oneida Holdings [and] replaced it with Owasco, which was [the name of] Hunter Biden’s law firm or business that he operated,” Bobulinski told Carlson.

“Hunter Biden and Jim Biden defrauded [us] and took the money for themselves … stole it from me and my other partners, Rob Walker and James Gilliar.”

As for his dealings with Ukraine, Dilanian acknowledged that while it looks “terrible” that he made money from a country that his father had incredible influence over, criminal charges for Hunter Biden are still not certain.

“We should all acknowledge it looked terrible,” the NBC correspondent said to Scarborough.

“He did this while his father was vice president and in charge of Ukraine issues, and he was taking $50,000 a month from that energy company, but no hint that he was ever going to be charged on that account,” he continued.

“But again, yes, the tax charges. It's a fairly simple proposition. But now, it all comes down to what is this US Attorney in Delaware, who is appointed by Donald Trump, what is he going to decide on this case?”