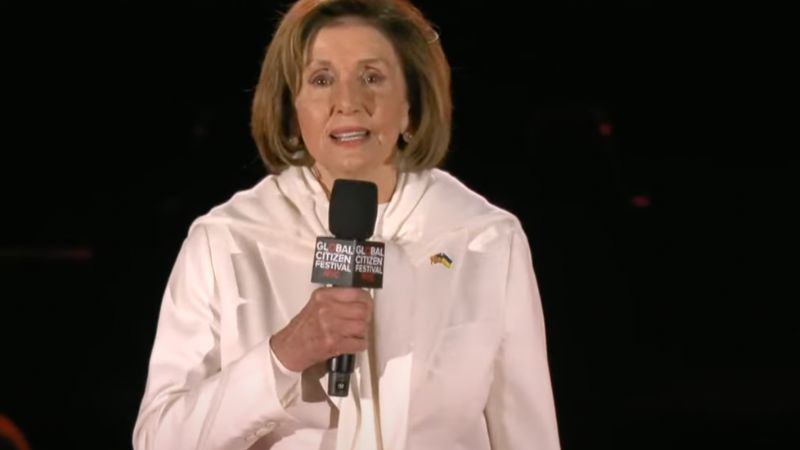 Speaker of the House of Representatives Nancy Pelosi was booed as she took the stage at the Global Citizen’s music festival Sunday night in New York City’s Central Park.

Jack Posobiec retweeted a clip in which the crowd’s boos can be heard as soon as Pelosi launched into her remarks. “As speaker of the house, I am here to thank you for your dazzling advocacy, entrepreneurial thinking, and determination as global citizens,” Pelosi said as a bystander remarked, “why is everybody booing?”

Earlier in September, Pelosi echoed President Biden’s dark and disturbing remarks that categorized MAGA Republicans as “a threat to this country” and “extremists” who must be defeated. On September 18, 41-year-old Shannon Brandt allegedly ran over 18-year-old Cayler Ellingson with his car, killing him, because the teen was a Republican.

Pelosi, decked out in a white pantsuit and scarf, continued through the boos. “It’s thanks to your help that the United States recently enacted historic climate legislation, which will be a game changer. It will slash carbon pollution by 40 percent by 2030, it will give a historic, an historic $370 billion to fight the climate crisis,” she added. “Better water and air for our children, better-paying jobs and lower energy bills for their parents.”

The heckling audience members did not relent through her monologue. Shouts of “Let’s go!” peppered her remarks.

The New York Post reports that Pelosi was not stymied by the jeers and pushed through the ruckus, saying her grandchildren Paul and Thomas were in the audience.

Pelosi, a lifelong Democrat who represents California’s 12th district, had previously appeared at the globalist music festival in 2016.

Global Citizen’s music festival tweeted out, “Thank you, @SpeakerPelosi for recognizing Global Citizens all around the world who took action in support of the new, historic climate legislation in the US!”

The festival offers free tickets to music enthusiasts who take an activist approach to “ending extreme poverty” according to the New York Post. This year’s guests included Metallica, Usher, Mariah Carey and The Jonas Brothers.