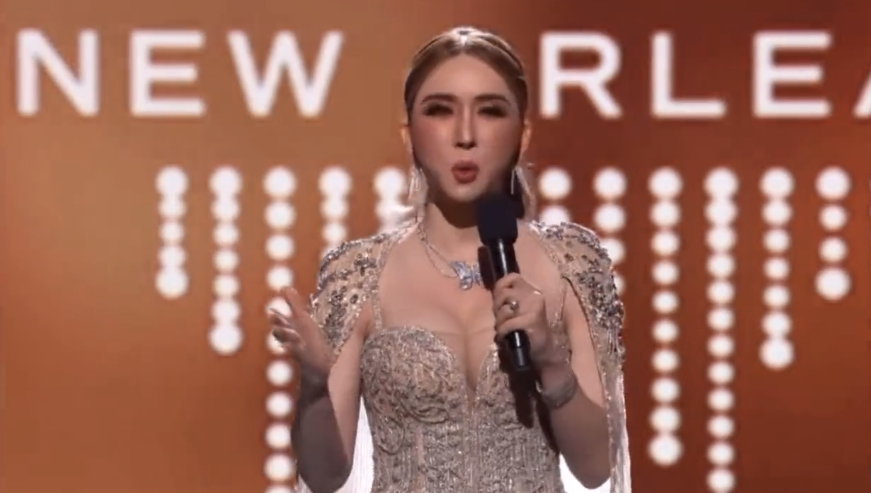 Miss Universe 2023 kicked off in New Orleans, with more than 84 contestsants from around the world gathering to compete for the title. Miss Ukraine came costumed as a “Warrior of Light,” Miss Switzerland dressed up like chocolate, but the real stunner was owner of the Miss Unvierse beauty pageant Anne Jakrajutatip, a trans-identified biological male.

“The Miss Universe organization from now on is gonna be run by women, owned by trans woman, for all women,” Jakrajutatip said to massive cheers from the assembled crowd. “For all women around the world, to celebrate the power of of feminism.”

Jakrajutatip came to the stage after the swimsuit competition, during the semi-final round. Jakrajutatip gave an interview to The Journal after taking charge of the organization, and the new Thai owner's identity was front and center for Jakrajutatip, who saw it as an accomplishment that a biological male who presents as female should run a beauty pageant.

Jakrajutatip said at the time of purchase that the buy was “extremely important,” not just for Jakrajutatip or the purchasing company JKN Global Group Public Limited, “but for all the women and trans women, particulary all the fans of Miss Universe who've been watching, who have been with us for 70 years now.

“It is the time that we to lift the spirit of women on the stage,” Jakrajutatip continued, “and having the platform globally to show to the whole world that we are intelligent, we are beautifully confident, and we can be iconic women.”

Tanya Posobiec's commentary can be heard over a clip of Jakrajutatip's speech from the event. “This is wild,” she said in disbelief, as Jakrajutatip reinforced gender and beauty stereotypes for women while claiming to liberate them. What Jakrajutatip was doing was liberating femininity from womanhood, as perhaps a thief would.

“Diverse cultures,” Jakrajutatip continued, “social inclusion, gender equality, creativity, the force of good and of course the beauty of humanity.”

The inclusion of biological males in the pageant, and a biological male owner, is so progressive, that it prompted some on Twitter to declare that now “we men” would be in charge.

Others noted that perhaps Jakrajutatip, in touting the pageant as a win for womanhood, had forgotten that Jakrajutatip was not in fact female.

The pageant, now more than 70 years old, saw Miss USA R'Bonney Gabriel take the title of Miss Universe. She was joined in the final round by Miss Venezuela and Miss Dominican Republic.

Miss Nevada in 2021 was the first openly transgender Miss USA contestant, and the Miss Universe pageant is one of the women's beauty pageants open to biological males who present as female. Kataluna Enriquez was eliminated in December of that year.

Jakrajutatip, 43, began gender transition while studying in Sydney, decided to keep the deep voice Jakrajutatip had, and has an extensive background in business, as well as advocating for “trans rights,” having set up the Life Inspired for Transsexual Foundation in Thailand.