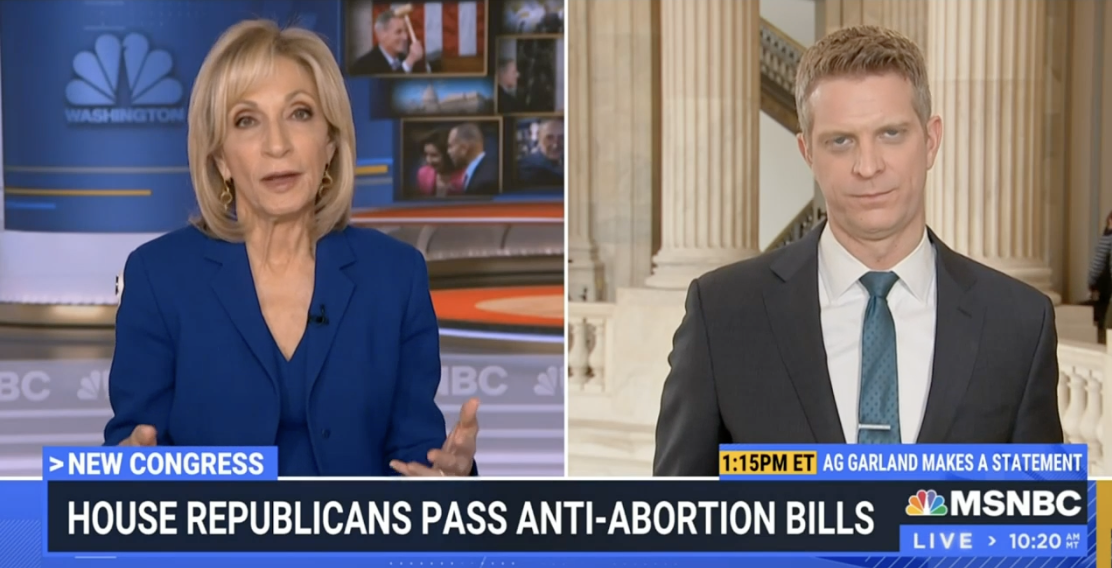 MSNBC's Andrea Mitchell took issue with Congresswoman Nancy Mace describing herself as pro-life, and excoriated the reporter who gave an account of Mace's comments using that term. She stopped MSNBC Capitol Hill reporter Garrett Haake to explain that the term “pro-life” is not an accurate label for the pro-life position.

Mitchell and Haake began discussing the anti-abortion bill passed in the House on Tuesday, with Haake noting that Mace had voted for the bill, despite perhaps not feeling that this was the moment her party needed to be legislating abortion.

The House passed “two anti-abortion bills Wednesday,” Mitchell said, “despite a majority of Americans saying that abortion should be legal.” She brought up Mace, saying that she had been on MSNBC explaining her view that it was not the right time to bring pro-life legislation to the House floor.

In light of this, Mitchell was surprised that Mace had voted for the bills that opposed the taking of unborn lives.

“We had Nancy Mace, of course,” Mitchell said, “the Republican from South Carolina on yesterday, and she spoke very passionately about why she thought it was the wrong tone for her caucus to be pursuing this abortion, abortion legislation and why it was unfair to women, especially women who've been subjected to rape or incest. It was, you know, other forms of sexual violence. And she ended up voting for the abortion measures. Explain that.”

“She told reporters after the fact that at the end of the day,” Haake said, “she was that she was, as she described herself, pro-life and that she felt that it was important to vote for these measures, despite their potentially politically damaging or politically unappealing appearance, if you will, for future voters.”

But Mitchell couldn't let the reporting stand. “Let me just interrupt for and say that ‘pro-life' is a term that they may, an entire group wants to use, but that is not an accurate description.”

“I'm using it because that's the term she used to describe herself, Andrea,” Haake said in his defense.

“I understand, I understand,” Mitchell said. “Anyway,” she continued after an awkward pause, “that was her explanation. Let's talk about Congressman Santos.”

Mitchell was bringing the fight over language out in the open, and while she couldn't explain in what way the pro-life terminology is inaccurate, Planned Parenthood explains that while “people who oppose abortion often call themselves pro-life… the only life many of them are concerned with is the life of the fertilized egg, embryo, or fetus. They are much less concerned about the life of women who have unintended pregnancies or the welfare of children after they’re born.”

Planned Parenthood recommends differentiating between those who are “pro-reproductive rights” and those who are “anti-abortion,” which of course brings with it a heavy dose of bias. The terminology of “rights” would be far more appealing to the average American than the terminology of “anti,” yet for those who advocate against abortion, it is not the right to terminate pregnancies that they are concerned with, but the rights of the conceived life to live.

There has been a push to rebrand the pro-life movement as one that is anti-woman, or, as the progressive left would prefer to say, “anti-birthing person.” Yet, for pro-life advocates like Mace, there is no right to abortion enshrined in the US Constitution.

The Supreme Court agrees and struck down a previous ruling, Roe v. Wade from 1973, that claimed there was. The laws on abortion, whether the practice of pregnancy termination should be legal or not, have now reverted to the states, with each state in the union able to determine for themselves whether they are pro-life or pro-abortion.

NPR made their changes in 2010, deciding that those who call themselves pro-life must be referred to as “anti-abortion” instead, using for the opposition “abortion rights advocates.”

This is also per the AP style guide, which states “Use the modifiers anti-abortion or abortion-rights; don't use pro-life, pro-choice or pro-abortion unless they are in quotes or proper names. Avoid abortionist, which connotes a person who performs clandestine abortions.” This is one of many guidances from AP on how to skew the conversation around pregnancy termination to be pro-abortion as opposed to anti-abortion.

One of the bills passed requires doctors to treat babies who are born alive after botched abortions. Doctors who let these infants die could be subject to criminal penalties, though the bill has no chance of becoming law since it will not even be brought up by the Democrat-led Senate.

The House also passed “a measure condemning attacks on facilities, groups, and churches that oppose abortion rights,” and it looking to speed up the process of getting legislation passed that would permanently ban federal funding for abortion. The Hyde Amendment does that but is only implemented on spending bills.