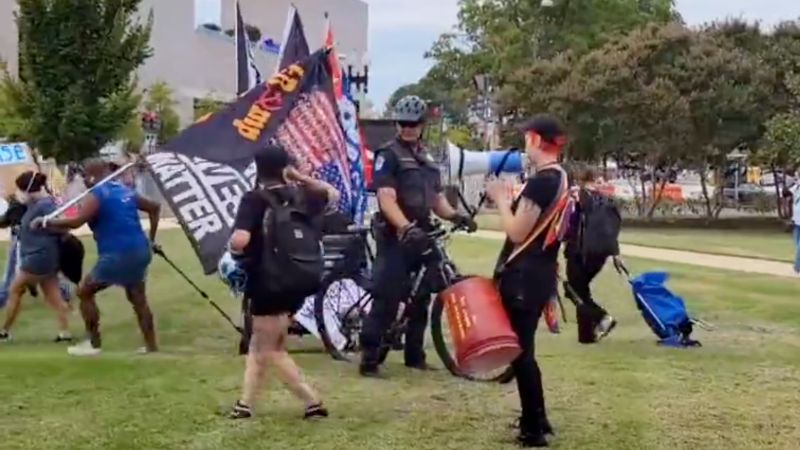 During a rally on Saturday held in support of those currently being held prisoner over their roles in the January 6 riot at the Capitol building, counter protestors cheered for the death of Ashli Babbitt, and began yelling at an officer.

“Ashli Babbitt f*cked around and found out,” the group was heard shouting through megaphones as Capitol Police officers attempted to redirect them.

Babbitt was the only person killed by Capitol Police officers on January 6, 2021, as she as attempting to pass through a barricaded door inside of the Capitol building.

As the group moved across the lawn though, their anger became directed towards one officer, who was riding on a bicycle next to the group along with other police.

The group was heard shouting expletives towards the officer, including “motherf*cker” and “piece of sh*t,” demanding to get his badge number.

“I’ll remember that, b*tch,” one woman shouted, after reading his badge.

“Little f*cking b*tch,” she continued. “Yo, get your dude… check your men.”

“You cannot obstruct a walkway you piece of sh*t.”

The group approached the protest at one point, remaining across the street and shouting “insurrectionists crying,” and “Trump is a loser, a little baby loser.”

According to the Twitter account Skyflyer Channel 8 News, Capitol Police officers told the counter protestors that they need to leave the area or risk arrest.

Instead of leaving, the group moved locations around the nearby grounds of the Capitol twice, with the officers repeating their calls.