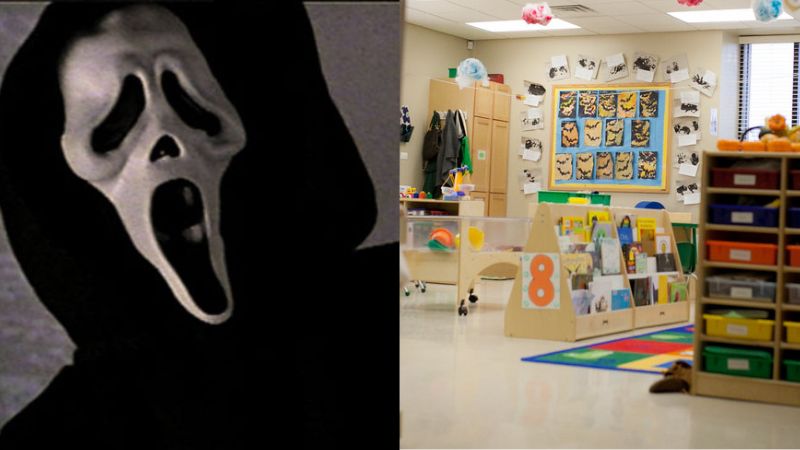 According to local news, the video was originally posted on Wednesday and as of Thursday four employees at the childcare center were terminated and the video taken down. One user reposted the video on Twitter and wrote, “This day care should lose its license and the workers arrested for child abuse.”

Parents were outraged by the video which was originally posted by the childcare center itself on Facebook.

The video shows the now-former employees donning the ghostface mask, a popular mask around Halloween and most commonly known as the mask worn by the killer in the Scream franchise.

At least two different lumbering women wear the mask on two separate occasions. One woman wears it and frightens the children as they are trying to eat lunch in peace. She approaches them and screams in their face at a feverous, banshee pitch. The screaming, cackling woman nears the children’s faces within inches.

The children all scream and cry in misery.

In another take, a seemingly different woman approaches the kids and yells at them, telling them to “clean up” and “act good.”

According to the Monroe Journal, the childcare facility owner of the last 20 years, Sheila Sanders, said she was unaware of the video until it went viral but that such conduct was not tolerated. She said that one of the videos was made back in September and another on Tuesday.

Sanders said, “I contacted my licensure, and she has gotten involved. The people that did those acts are no longer with us. They were fired. I wasn’t here at the time and wasn’t aware they were doing that. I don’t condone that and never have. I just want to say it’s been taken care of.”

The Monroe County Sheriff’s Office and the Mississippi State Department of Health are now looking into the matter.

Parents have come out in support of Sanders, her swift action, and the center.

Mother Kimberly Smith, whose child is in the video, said, “I know 100% that Ms. Sheila, the owner and director, was not aware of this situation that was going on and as soon as she found out, all parties were terminated immediately. The witch hunt that has been going on for her and the other ones still here, it really needs to stop. Was the situation that did happen horrible? Absolutely. But should this daycare be shut down and others be villainized that are still here, absolutely not.”

“Am I okay with what happened to the extent of what happened? Absolutely not, but I know she took care of it, and my babies are safe here,” Smith added.