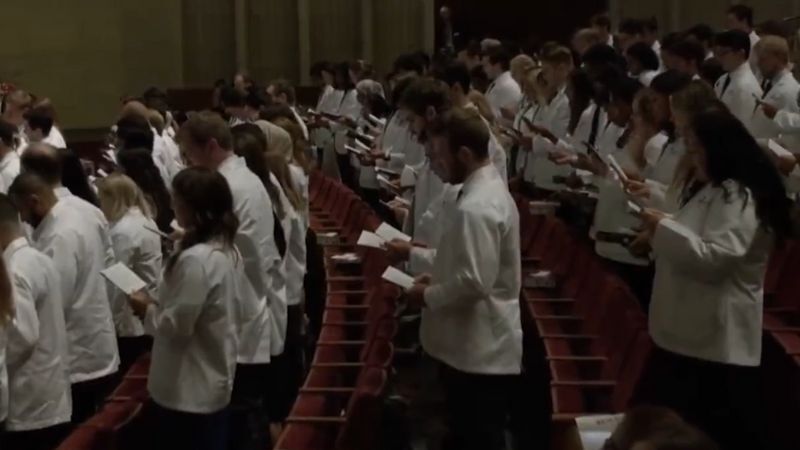 Incoming students of the University of Minnesota Medical School (UMMS) recited an unusual pledge this year. Instead of the traditional “first do no harm,” the class of 2026 committed to “uprooting the legacy and perpetuation of structural violence deeply embedded with the healthcare system.”

Then, they had to “recognize inequities built by past and present traumas rooted in white supremacy, colonialism, the gender binary, ableism, and all forms of oppression.” According to Campus Reform, the oath was written by the Oath Writing Committee which was made up of 15 students.

“It is a common practice at medical schools in the United States to build upon the intent of the Hippocratic Oath to promote humility, integrity, and beneficence,” UMMS Media Relations Manager Kat Dodge told Campus Reform. “Each year at the University of Minnesota Medical School, the incoming students work with faculty to write an oath that reflects these core elements, values, and ethics the class aspires to uphold.”

After committing to “promoting a culture of anti-racism,” they were required to “pledge to honor all Indigenous ways of healing that have been historically marginalized by Western Medicine.”

Robert Englander, the speaker at the swearing in ceremony, is a graduate of Yale Medical School, with a Master’s of Public Health from Johns Hopkins, who did his residency at the Children’s National Medical Center, and a fellowship at Harvard Medical School. In other words, as Christopher Rufo pointed out, a man with
“impeccable credentials” is “suggesting that shamanism and Western science are equally valid medical practices.”

The program for the event shows that Ana Nunez, Vice Dean for Diversity, Equity, and Inclusion, closed the ceremony. Nunez specializes in gender medicine.

“It’s past time for reasonable doctors to stand up and denounce this poison,” said Rufo. “Western medical science and shamanic healing are not equally valid cancer treatments. ‘Gender medicine’ that results in mastectomies for girls and penectomies for boys is a barbaric violation of ethics.”

Not The Bee called the oath an “amazing blend of Marxism and paganism.”