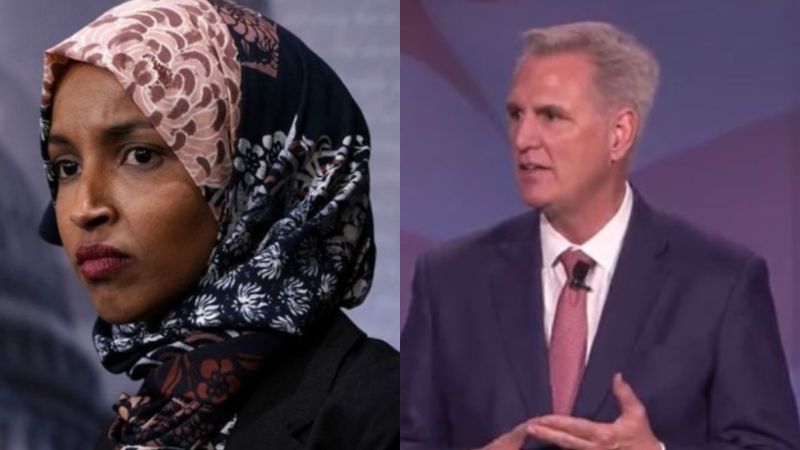 Kevin McCarthy will follow through on Republican threats to boot Democratic Representatives Eric Swalwell (D-CA) and Adam Schiff (D-CA) from the Intelligence Committee, and stop Ilhan Omar (D-MN) from serving on the Foreign Affairs Committee, the Daily Mail reports.

Former Democratic House Speaker Nancy Pelosi stripped GOP Congresswoman Marjorie Taylor Greene (R-GA) and Paul Gosar (R-AZ) from being on their committee assignments, with Republicans having warned Democrats that this decision by Pelosi would lead to setting a precedent of dictating who serves on what committees. Typically, Democratic Minority Leader Hakeem Jeffries would give names to the committees of who was to serve, and McCarthy would approve them.

McCarthy told PunchBowl News: “It's not like it's anything new. Remember, this is what Nancy Pelosi – this is the type of Congress she wanted to have.

He continued: “Schiff has lied too many times to the American public. He should not be on Intel.”

After 15 rounds of voting on whether McCarthy would become Speaker, the next big task will be committee assignments, as the Democrats still intend to name Schiff, Swalwell, and Omar. McCarthy has vowed since 2021 to block the three from being on their respective committees.

Republicans will place Greene, Gosar, and George Santos to committees.

Last year, then-Speaker Nancy Pelosi booted Greene off of the Budget and the Education and Labor panels in February over comments made before being elected to Congress.

The Daily Mail writes that Greene will likely be placed on the Oversight and Accountability Committee, “among other potential panel assignments.”

Gosar was stripped of his committee duties after posting an anime video that showed him acting violently toward New York Congresswoman Alexandria Ocasio-Cortez.

Omar released a statement regarding McCarthy's threat to remove her from the Foreign Affairs Committee, where she said that the Republican Party has “made it their mission to use fear, xenophobia, Islamophobia, and racism to target me on the House Floor and through millions of dollars of campaign ads.”

“Whether it is Marjorie Taylor Greene holding a gun next to my head in campaign ads or Donald Trump threatening to ‘send me back’ to my country (despite the fact that I have been a proud citizen of the United States for more than 20 years), this constant stream of hate has led to hundreds of death threats and credible plots against me and my family,” she said.

It is not known what committee Santos would serve on.