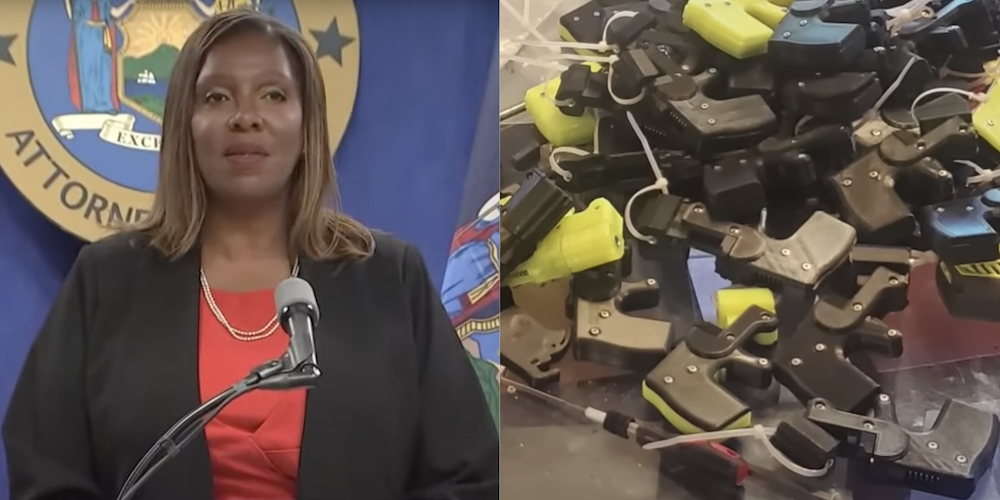 Since 2019, New York Attorney General Letitia James has been encouraging residents of her state to participate in her office’s gun buyback program, wherein the government offers money for firearms, “no questions asked.”

At an event held in Utica, NY in August, one man allegedly gamed the system, walking away with thousands of dollars after turning in over 100 guns he made using his 3D printer.

According to WKTV, the man, known only as “Kem,” had seen posts online about people pulling off such stunts, and decided to try it for himself.

Using his $200 3D printer, Kem quickly birthed a battery of plastic firearms, and drove six hours from his home to Utica, where the buyback program was holding an event.

“I 3D-printed a bunch of lower receivers and frames for different kinds of firearms,” said Kem.

Kem explained that upon arriving in Utica, he was asked how many guns he wished to turn in, to which he replied, “110.”

After spending the rest of the day negotiating with staff, Kem was presented with 42 gift cards, each worth $500, making the total payout $21,000.

“I'm sure handing over $21,000 in gift cards to some punk kid after getting a bunch of plastic junk was a rousing success,” Kem told WKTV, adding that, “gun buybacks are a fantastic way of showing, number one, that your policies don't work, and, number two, you're creating perverse demand.”

He argued that programs such as James’ “don't actually reduce crime whatsoever.”

According to James’ office, the August 27 buyback event “resulted in the collection of 296 guns, including 177 ghost guns, 42 long guns, 41 handguns, 33 non-working guns, and 3 assault rifles.”

Ghost guns are firearms that are unregistered and unregulated, often built by users themselves. Kem’s 3D-printed weapons would fit into this category.

Since 2019, James’ program has resulted in the buyback of 3,500 guns, and she has no intention of stopping any time soon.

In a statement to KWTV, her office slammed Kem for his actions, and explained that they have “adjusted [their] policies to ensure that no one can exploit this program again for personal gain.”