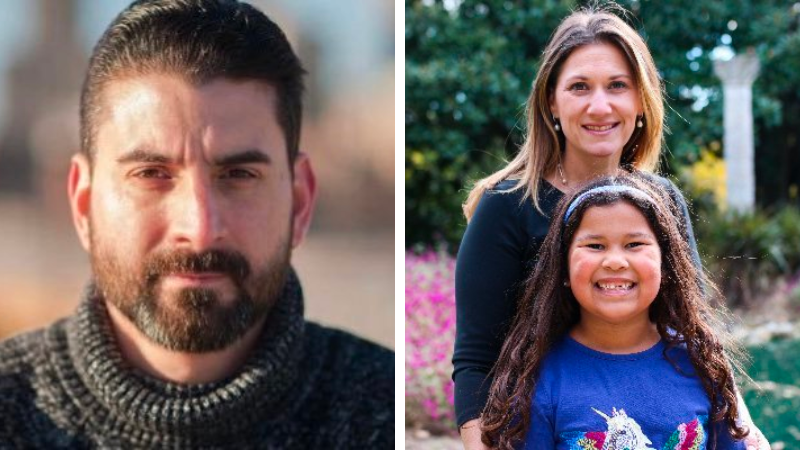 On Columbus Day Monday, David Leavitt, who describes himself as an “award-winning multimedia journalist” on Twitter, urged his hundreds of millions of followers to call child care services on a single mother and Virginia state senate candidate who said she teaches her daughter “real American history.”

The argument began on Sunday, when Tina Ramirez, a single mother and senate candidate for Virginia’s 12th District, posted to Twitter about PayPal allegedly saying that they would take $2,500 out of the accounts of people who spread “misinformation.”

In response, Leavitt wrote on the afternoon of Columbus Day, “Why are you celebrating torture, rape, murder, and enslavement?”

In response to Leavitt, Ramirez wrote, “I teach my daughter real American history. I refuse to join the radical left’s campaign to erase history.”

This tweet prompted Leavitt to request that his over 300 million followers call care cervices on the woman, writing, “Can someone please call child care services on Tina Ramirez who’s teaching her child to be a racist?”

After the call for action, Leavitt continued in his thread to complain about the long wait time for the Virginia State hotline for child abuse.

“The Virginia State hotline for child abuse has a 10+ minute hold and is experiencing “high call volumes” with 14 callers ahead of me,” wrote Leavitt. “This is absolutely unacceptable. How many people try to report child abuse and hang up? How many children will continue to be abused?”

In response to Leavitt’s tweet calling for action, Ramirez responded, “Mighty bold and liberal of you to lecture a Hispanic mother with a black daughter on racism. What’s next? Are you going to lecture me on women’s rights?”

In response to Ramirez’s reply, Leavitt said, “The lady who’s teaching her kids how to be racist thinks I’m ‘bold.’ Does she know I’m hold to report her to child and family services?”

Leavitt also told Ramirez that “having a black child doesn’t make you any less racist.” After updating his wait time in the thread, Leavitt published the same tweet again.

In a thread of tweets calling out Leavitt, Ramirez said his actions were “appalling,” saying that he tied up child care services lines from hearing serious cases.

“Tonight, @David_Leavitt called Child Protective Services to report ‘child abuse’ because I teach my daughter about Christopher Columbus and real American history. As a single mother, I am my daughter’s only support. This is appalling for a number of reasons,” Ramirez wrote on Monday night.

“Radical leftist @David_Leavitt didn’t just call CPS to level accusations against me,” Ramirez wrote. “He waited an hour on hold, tying up the lines of our CPS professionals trying to help Virginia’s children. The radical left is willing to put our children at risk to cancel conservatives.”

“It’s no surprise that a member of the radical left is willing to go so far as to call CPS on a single mother – simply because they want to erase history,” she added. “The radical left doesn’t want parents making decisions for their own families.”

In response to Leavitt calling child care services on the mother, many Twitter users called him out with some noting a similar instance at a Target.

Under Virginia’s Code, it states that those who knowingly make false reports of child abuse or neglect would be guilty of a Class 1 misdemeanor.

“Any person fourteen years of age or older who makes or causes to be made a report of child abuse or neglect pursuant to this chapter that he knows to be false shall be guilty of a Class 1 misdemeanor,” the state’s code says.

Virginia’s Code defines “abused or neglected child” as a minor that has received intentional physical or mental harm from a primary care giver through intentional disfigurement, impairment of bodily or mental functions, risk of death, being present while the caregiver makes or sells controlled substances, is neglected necessary care, abandoned, being subjected to sexual acts, sex trafficked, and more.