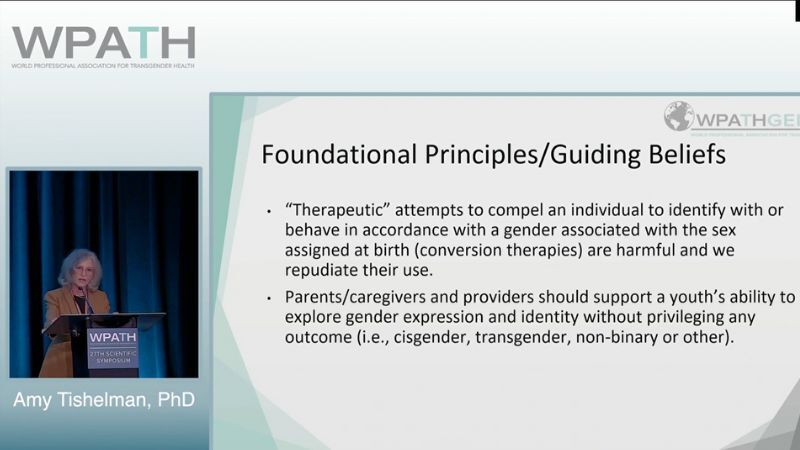 One of the world’s leading doctors in the field of pediatric gender medicine declared Sunday that she doesn’t care if children want medical interventions; she just wants them to be happy.

Dr. Amy Tishelman, formerly of the controversial Boston Children’s Hospital famous for gleefully encouraging children to surgically transition, made the statement during a presentation at the World Professional Association for Transgender Health (WPATH) conference in Montreal.

“I don’t care if they want medical intervention; I just want them to be happy. I want their families to be happy,” said Tishelman, after stressing how important it is for clinicians working with these children not to “privilege any gender identity.”

This very noble sentiment conveniently ignores the Detrans Subreddit that has almost 40K members, many of whom thought as children and adolescents that they needed surgery to be happy only to realise afterwards that it was a huge mistake.

“We don’t want to tell kids it’s better to be ‘cisgender’,” Tishelman explained. “That’s not a good way to be if you’re a gender-affirming therapist.”

“We want to make sure they understand we’re not covertly trying to ‘therapize’ their gender diversity,” she said, and suggested that when doing exploratory therapy with kids, some clinicians may be trying to “covertly encourage ‘cisgender’ identities.”

“When children go to mental health practitioners, there’s a tendency to be mistrustful. We want to make sure they know that we’re not therapizing their gender,” she went on. “We’re not working to limit the number of transgender and gender diverse youth that are out there.”

“It’s important not to privilege … a cisgender outcome,” Tishelman stressed repeatedly throughout her presentation.

So in other words, in the world of “gender-affirming care” clinicians, to help a child accept his or her body and avert the need for major medical intervention is no more preferable than telling the child they are the opposite sex, setting them up for infertility, major surgeries, and a whole host of serious health issues. Both these outcomes are equally desirable to these supposed experts in pediatric medicine.

A recurrent theme throughout the conference, and repeated several times by Tishelman in her presentation, has been this idea that gender dysphoria, the deep seated discomfort with one’s biological sex that requires a cocktail of drugs and major surgeries to resolve, is somehow not a pathology, not a mental health disorder.

“Clinicians must have a strong background in mental health,” said Tishelman, although she was quick to point out that is “not because we think gender diversity is a mental health issue,” but because of the “gender minority stress” that these children experience.

“It’s important not to constrict gender roles,” explained Tishelman. “If a boy likes to wear dresses – fine. If a girl likes to have a crew cut and play with trucks – fine. That isn’t in itself being transgender.”

“That’s different from a child who says: ‘I’m not a boy’ or ‘I’m not a girl’,” she went on, but then fails to explain what the difference is.

“Children are not adults,” she explained earlier in the presentation. “You can’t extract them from their environment. If you want to help these kids, you have to know what messages they are getting in their environment.”

The disproportionately high rates of children on the autism spectrum being referred to gender clinics were brushed off with a casual: “we’re all a little neurodiverse.” A recent study found that 48 percent of children and young people who were seen at the soon-to-be-closed Tavistock pediatric gender clinic in England displayed signs of autism or neurodivergence.

At the beginning of the talk, Tishelman said the teams underlying principles when writing the chapter were “Do No Harm.” It’s difficult to see how their advice which leads children down a path to sterility, body-part amputation, and serious health risks abides by that.