Kevin McCarthy goes after Democrats with ‘Commitment to America’ plan 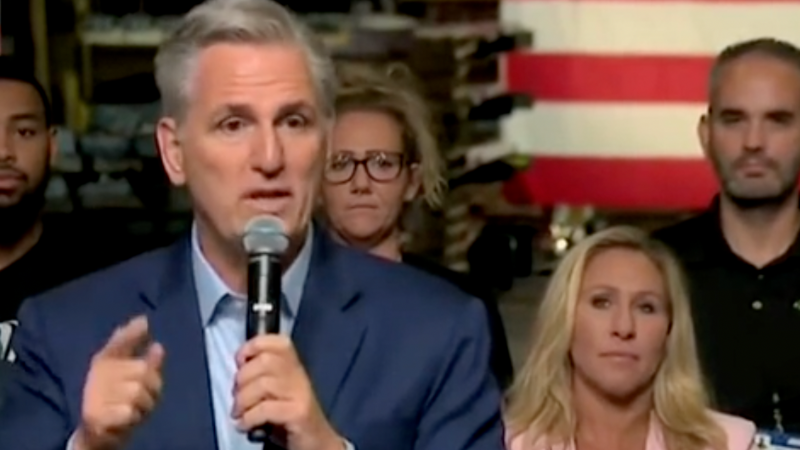 House Republican leader Kevin McCarthy on Friday rolled out an agenda aimed at tackling a range of issues, from taxes, border crisis, and to the opioid epidemic, to give the GOP an edge over Democrats in the upcoming midterm elections.

Rep. McCarthy, who represents California's 23rd district, is poised to become speaker of the House if Republicans take back control in November. The minority leader delivered the speech at DMI Companies in Monongahela, PA, on stage with other notable lawmakers including Georgia Rep. Marjorie Taylor-Greene and New York's Elise Stefanik.

In the announcement of the agenda, called the “Commitment to America,” McCarthy came out swinging, saying to a cheering audience “​​Our very first bill we’re gonna repeal 87,000 IRS agents… Our job is to work for you, not go after you.”

McCarthy then went on to slam the Biden Administration, blaming them for the open-borders policies that have let deadly fentanyl make its way into the US. The most recent numbers from the CDC show that 107,000 fatal fentanyl overdoses were reported between December 2020 and December 2021, making the opioid epidemic something that lawmakers must address to win over voters.

“Fentanyl, the number one killer of Americans between the ages of 18 and 45… that poison starts in China and comes across our border. Do you realize it kills 300 Americans everyday?” McCarthy asked the crowd.

“But the White House tells us [the border] is secure,” he jabbed.

On the issue of crime, the agenda aims to put 200,000 more police on the streets by providing federal funding for recruitment and retention bonuses. McCarthy also pledged a host of investigations on issues including  the origins of Covid, Big Tech censorship, the US Afghanistan withdrawal, and the “politicization” of the Justice Department.

“Unfortunately, over the past two years, Democrats in Washington have led America off-track,” the agenda states online.

“They created crisis after crisis: from crippling inflation and rampant crime, to failing schools, border  chaos, and disrespect for our nation across the globe.”

“Rampant crime” is one of the top voting issues that may play out in the GOP's favor in the midterms. A new poll from Convention of States Action, in partnership with The Trafalgar Group, found that 77% of voters won't vote for candidates who support Democratic policies on crime that prevent police from effectively curbing violent crime.

“Crime is the beneath-the-iceberg issue for voters in 2022, it’s absolutely clear in these numbers. The new wave of pro-criminal, anti-justice policies in Democrat-led blue cities are impacting everyone, which is why this poll shows such a strong response when asking people how they feel about this specific policy,” said Mark Meckler, President of the Convention of States in a press release.

Even out of Democrat voters, only 6.3 percent say they are more likely to vote for a candidate with such policies.

“Today’s rollout is the latest evidence of House Republicans’ wholehearted Commitment to MAGA: going all-in on an extremist agenda designed to greatly diminish Americans’ health, freedom and security,” Pelosi said in a statement.

“This alarming new extreme MAGA platform threatens to criminalize women’s health care, slash seniors’ Medicare and raise prescription drug prices, and attack our free and fair elections. These appalling proposals have long been advanced by right-wing politicians and are widely supported by the dark money special interests who call the shots in the GOP.  But this extreme MAGA agenda is way out of step with Americans’ priorities, who align with Democrats’ vision of putting People Over Politics: with lower costs, better-paying jobs and safer communities.”