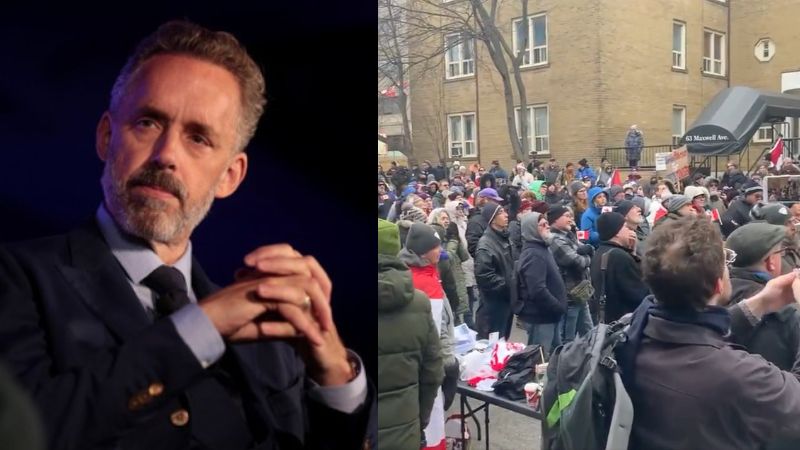 Hundreds of people gathered outside the Ontario College of Psychologists in Toronto on Wednesday to protest the licensing body's decision to force “mandatory social media retraining” on Canadian professor and psychologist Dr. Jordan B. Peterson.

Protesters gathered along both sides of Eglinton Avenue outside the Ontario College of Psychologists offices, holding up banners and signs of support and solidarity, as well as some anti-Trudeau slogans.

Also in attendance was the founder and leader of the People's Party of Canada, Maxime Bernier, who spoke to the enthusiastic crowd about how the erosion of freedom of speech in Canada is a sign that Trudeau is running an authoritarian government.

Last week, Peterson was told by the College that he must commit to the following “undertaking“: “to work with either Dr. Erika Abner, LLM, LLB, Ph.D, or Gail Siskind, RN, MA, to review, reflect on, and ameliorate [his] professionalism in public statements,” to “complete the Coaching Program within six months of receiving the ICRC Decision in this matter,” noting that the program could be extended at the discretion of the coach.

Peterson said that he has “absolutely refused to do so,” telling The Post Millennial at the time that the “honorable pathway for those responsible [for this decision] is public apology and resignation.”

“More than a dozen mistakes–if mistakes they were: that's too many mistakes to merely apologize for. This is particularly true because they rejected all my reasonable procedural questions out of hand, failed to note that the majority of the complainants falsely identified themselves as former clients, rushed to sentencing, and announced my culpability publicly despite my stated intent to challenge their decision on legal grounds,” he told The Post Millennial prior to Wednesday's protest.

“This is particularly true because all of the complaints were explicitly and obviously political in nature–to the point of absurdity,” he added, suggesting that “one such sin was retweeting [Conservative Party of Canada leader] Pierre Poilievre.”

Poilievre jumped to Peterson's defense on Twitter last week, arguing that “it should go without saying that in a free country, professionals should not lose their jobs and licenses because they express a political opinion contrary to the licensing body that's mandated by the government.”