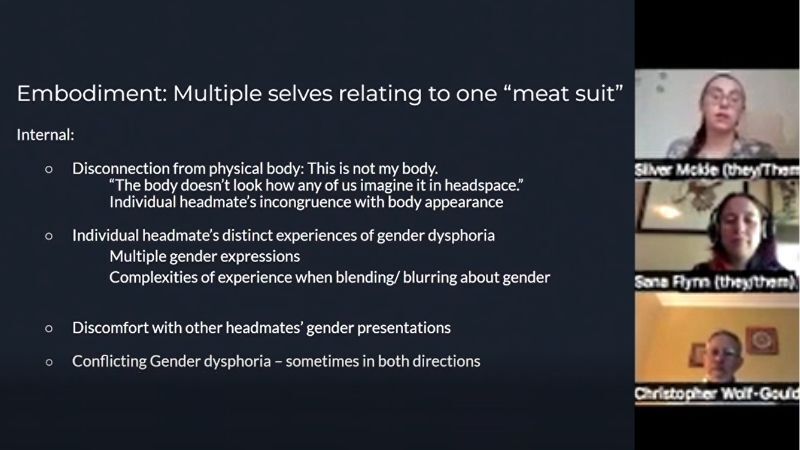 If the World Professional Association for Transgender Health was hoping that their 2022 conference in Montreal would instill confidence in people around the globe regarding their credibility as a scientific organization, the presentation titled “An Exploration of Trans and Plural Experiences” was perhaps not the best way to achieve that aim.

The research team responsible for the study being presented included an individual identifying as a “multiple” which means “many in one body.” The Redwoods, the person said, are in fact “nine people living co-consciously in one body.”

“We the Redwoods are many people sharing a trans body, and experienced great shame and clinical ignorance when we figured out both these things in 2012,” the Redwoods said in a statement quoted at the beginning of the presentation. “For 4 years, we alternated between delight in each other’s company and terror in what society would think of us if they really knew.”

Note the use of the plural “we”.

“We heard stories of people denied trans care, forced to choose between DID (dissociative identity disorder) and gender dysphoria diagnoses because providers wrongly believed you could not be both,” the multiple people inside one body continued.

The presentation explained that it is apparently common for plurals to feel “this is not my body”, which goes a step further even than the “born in the wrong body” narrative of the transgender movement. Also common is discomfort with the gender presentation of “other headmates”, meaning these people don’t just have to constantly obsess over their own gender identity, but also over the gender identity of the people living inside them.

A “headmate” is “an individual agent, person, or consciousness within a ‘plural system’.”

The presentation then moved onto a slide titled: “Embodiment: Multiple selves in one ‘meat suit’.”

The research team given a slot at the World Professional Association for Transgender Health’s annual conference appeared to be grappling with the complexity of what to do about making permanent changes to the “meat suit” when several, sometimes hundreds, of “agents” with differing gender identities live inside it. No apparent solution has been settled on so far.

Panel attendees never find out whether a female “meat suit” who supposedly has multiple people living inside her, one or more of whom are male, would be considered eligible for shots of testosterone, a bilateral mastectomy, and phalloplasty (the construction of a “neo-penis” using the skin and flesh of the patient’s forearm).

For the social and legal transition aspect, they/them pronouns are suggested to appease all the “agents” of various gender accommodating the “meat suit.”

One solution for the internal gender struggle among all the headmates is to construct a “singletsona”, which is the term used by plurals to describe “a collective singular identity used to mask their plurality and present as one person.”

Transgender plurals apparently experience a double-whammy of oppression in the form of transphobia and “plural negativity”, both of which can be internalized and can affect each headmate differently, we are told.

Many will hide their plurality when seeking transition care as it is seen by affirming doctors as “undercutting trans validity.”

Naturally, affirmation is seen by these researchers as the answer to helping these troubled individuals lead happy, healthy lives, and can lead to them accepting themselves and finding “plurality and transness as a strength and source of life skills.” We are told that this can lead to “gender and plural euphoria.”

Clinicians are recommended to treat each system, defined as a group of people living in the same meat suit, as a “unique group of multilayered gender and plural identities.”

Put in a historical context, the current epidemic numbers of young people identifying as transgender appear to be very similar to the epidemic of multiple personality disorder which swept North America in the 1980s and 1990s. That epidemic ended in a deluge of lawsuits when the bubble burst and everyone realized therapists were inducing the psychiatric condition into their mostly female patients. The media also played a huge role, with the mass-market paperback book Sybil triggering the disorder and day-time talk shows fueling it.

Multiple personality disorder was then renamed as Dissociative Identity Disorder and once again faded into the background and became very rare. That was until the rise of social media, particularly TIkTok, which appears to have triggered renewed interest in the disorder.

This is not the only overlap between multiple personality disorder and the transgender movement. In the 1980s, the multiple personality disorder epidemic became entwined with the Satanic ritual abuse panic, another social contagion of the era, in which it was believed that ordinary daycare owners, many of them mothers and grandmothers, were connnected to a nationwide network of Satan worshippers who sexually abused the children in their care and dressed in hoods and gowns to sacrifice babies on Satanic alters.

Dr. Diane Erhensaft, who co-authored the current Child chapter of WPATH's Standards of Care 8, was heavily involved in spreading the panic, which was eventually proven to be entirely fabricated, sadly only many innocent people had been wrongly convicted and spent years in prison. Erhensaft is famous for stating that toddlers tearing barrettes out of their hair  is a “gender message” and a sign they could be transgender.