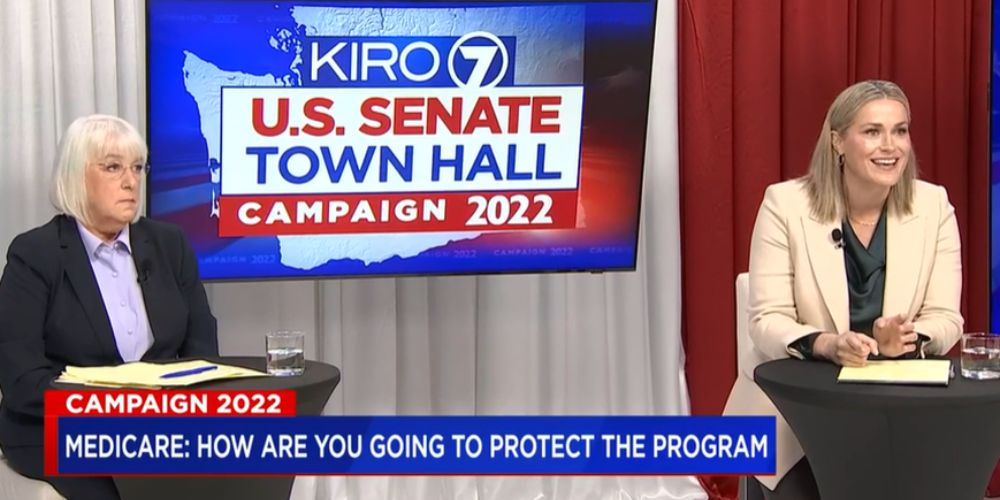 Over the weekend, Real Clear Politics (RCP) switched Washington state’s Senate race from “Leans D” to “Toss Up,” which may determine control of the chamber.

The latest poll, which contributed to the RCP average, comes from the Trafalgar Group and shows 30-year Washington’s Democrat incumbent Senator Patty Murray with 49.4 percent to Republican challenger Tiffany Smiley’s 48.2 percent, a statistical tie with a margin of error of 2.9 percent, with 2.4 percent of voters remaining undecided.

The surge appears to be coming from independent voters, who accounted for 22.4 percent of the respondents. The undecided voters do not look like a good parachute for Murray with 80 percent of thinking the country is on the “wrong track,” according to another poll.

Last Monday, the Moore Information Group (MIG) poll revealed that Smiley was tied with Murray at 46 percent, with Smiley up two percentage points since MIG’s September poll, with Murray losing two points since their last poll. Only 18 percent of undecided voters have a favorable view of Murray.

Smiley performed well in last week’s debate, which is a likely contributing factor to her rise in the polls. Smiley slammed the 71-year-old incumbent for championing President Joe Biden’s “Inflation Reduction Act” and voting in lockstep with the Democrat agenda.

Smiley said during the debate, “Sen. Murray stood with Joe Biden with the ‘Inflation Reduction’ Act and said this is going to help us. Don’t be deceived by the name; it does nothing to combat inflation, in fact, it raises taxes on all of us.”

Smiley added, “The Inflation Reduction Act does nothing to reduce inflation. In fact, it raises taxes on all of us and Senator Murray was the deciding vote.”

Six other US Senate races are now considered statistical ties in addition to Washington,  including Arizona, Georgia, Pennsylvania, Nevada, New Hampshire, and Wisconsin.