FIVE Canadian police officers killed in just over one month 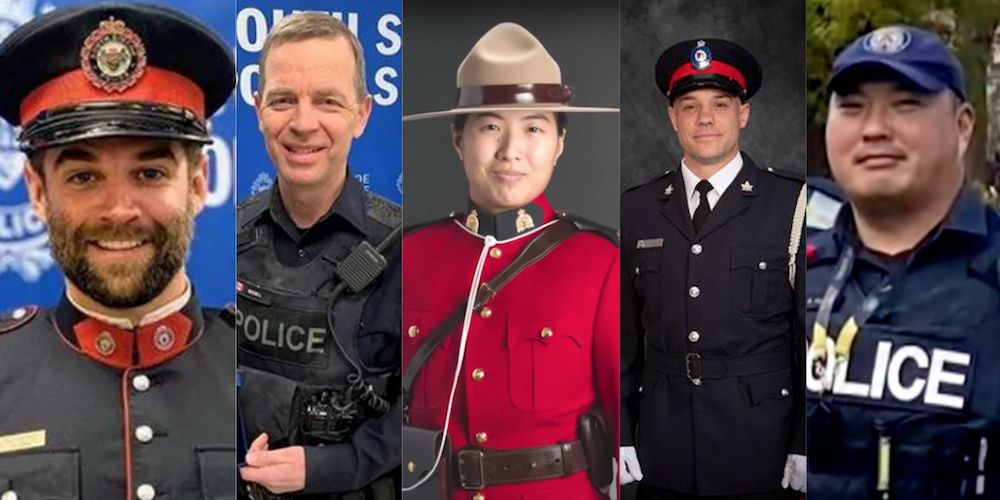 Since mid-September, five Canadian police officers have lost their lives, shocking the public and members of law enforcement agencies across the country.

Four of the slain officers were killed on duty, while the fifth was simply driving to work.

On September 12, 22-year veteran of the Toronto Police Service Constable Andrew Hong was shot and killed while out for lunch with his fellow officers at a Mississauga Tim Horton’s in what authorities deemed to be an “unprovoked” attack.

On October 11, Const. Devon Northrup and Const. Morgan Russell from the South Simcoe Police Service were shot after responding to an incident in Innisfil and later succumbed to their injuries.

Most recently, on October 18, Const. Shaelyn Yang of the Burnaby RCMP was stabbed to death by a homeless man. The vagrant, Jongwon Ham, was subsequently charged with first-degree murder.

As CTV News reports, an investigation revealed that a warrant had been put out for Ham’s arrest stemming from charges of assault in March after he failed to appear in court last week.

Tributes for Yang poured in, as they did for all the fallen officers who sacrificed their lives for the protection of our country over the past month and a half.

Former BC Solicitor General and West Vancouver Police Chief Kash Heed called Yang’s death a “wake-up call,” and lamented the fact that it could have been prevented.

“We’ve got people with severe emotional health issues that are not being dealt with in a comprehensive nature,” he told BurnabyNow, “and as a result, they’re out there in society roaming our streets.”

Heed went on to warn that hiring hundreds more police officers “will not make a difference unless we put those other supports in place.”

Policing the streets of Greater Vancouver has become more challenging as of late, given the rising rates of homelessness and drug abuse. The fact that many of the people who fall into those groups also have mental health issues compounds the problem.

In his documentary, Vancouver is Dying, political commentator Aaron Gunn highlighted the plight of law enforcement trying to do their jobs in a city out of control.

Across the Lower Mainland, and particularly in Vancouver, voters made it clear in Saturday’s municipal elections that they wanted to see those in charge take a tougher stance on crime, and the so-called “tent cities” where such activity runs rampant.