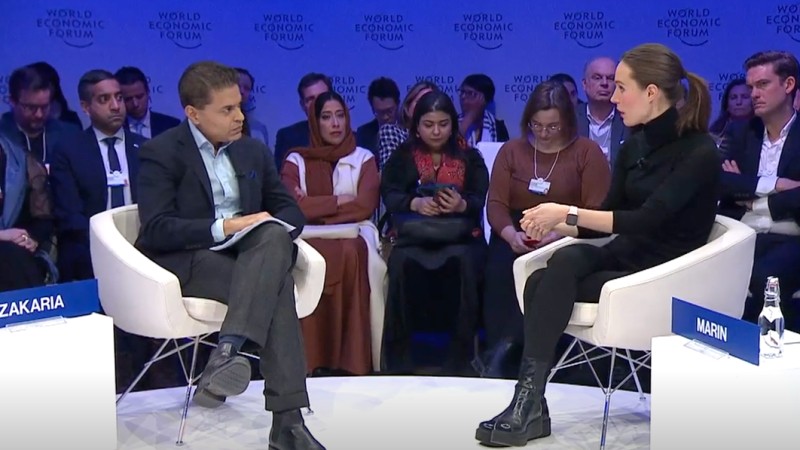 Ukraine must win the war against Russia in order to ensure that a message is sent to the world that there is nothing to gain from invading other nations, the Prime Minister of Finland said on Tuesday.

Speaking with journalist Fareed Zakaria at the World Economic Forum's annual meeting in Davos, Prime Minister Sanna Marin explained that while she doesn't know when the war will end, “we have to make sure than when it ends Ukrainians win.“

“I don't think that there's any other choice,” she added. “If Russia would win the war, then we would only see decades of this kind of behavior ahead of us.”

She said that the world is watching the war very closely, which makes it even more important that the outcome sends out the right message.

She later added that her country will continue its support for Ukraine for as long as the war continues.

The Prime Minister also talked about her country's application to become a member of NATO. Finland applied to become a member, along with Sweden, shortly after the Russian invasion of Ukraine began, stating at the time their commitment to defending Ukraine and other NATO members.

“We want to become a member of NATO because we don't ever again want war in Finland,” Marin said on Tuesday.

“We have been in war with Russia before. We have very good military capabilities, but we have to make sure that there is also the threat that Article 5 gives,” she added.

Article 5 states that if any one NATO member is attacked, “each and every other member of the Alliance will consider this act of violence as an armed attack against all members and will take the actions it deems necessary to assist the Ally attacked.”

Marin wants to see Finland, alongside Sweden, become a NATO member as soon as possible, but the process is being held up by Turkey, who has explicitly stated on several occasions that it would bar the two nations from joining the alliance.

As for Ukraine becoming a member of NATO, she acknowledged that cannot happen while the country is at war, but stated that if they were already a member, then “there wouldn't be a war now in Ukraine.”