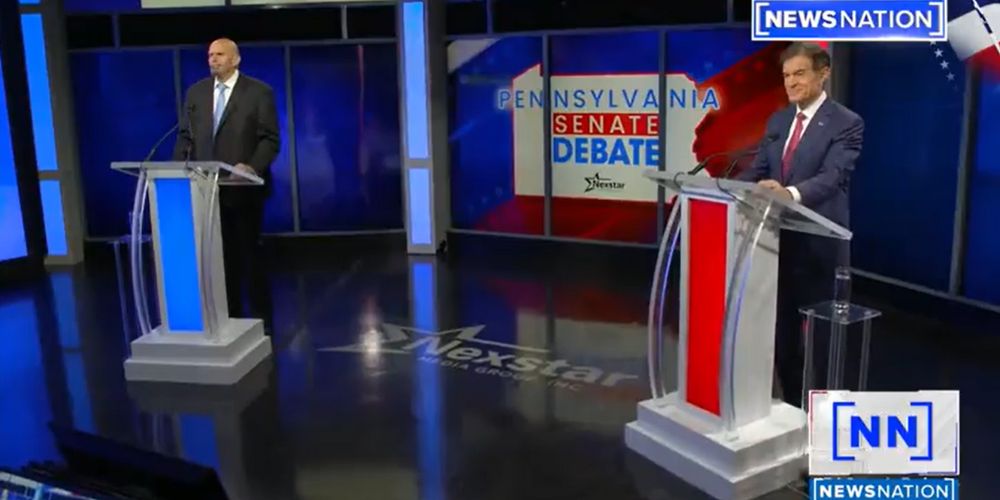 In a debate between Mehmet Oz and John Fetterman for the Pennsylvania senate on Tuesday, Fetterman used closed captioning technology so that he could read what was said by moderator and opponent since he could not comprehend them otherwise. This is because he suffered a stroke right before the primary this spring and now suffers from what the campaign calls an auditory processing deficiency.

Even with the added tech, Fetterman's performance was sub-optimal, with many saying it was painful to watch. In response, the campaign blamed the tech for his poor performance. Both campaigns agreed to let Fetterman use the captioning, which had everything the moderators and Oz said typed out on a large screen for the debate after suffering a stroke in May.

“We are thrilled with John’s performance,” Fetterman for Pennsylvania communications director Joe Calvello said. He did remarkably well tonight – especially when you consider that he’s still recovering from a stroke and was working off of delayed captions filled with errors. John won countless exchanges, counter-punched aggressively, and pushed back on Oz’s cruelty and attacks.”

Nexstar, the company that provided the captioning system for the highly anticipated Pennsylvania Senate debate, pushed back on Democrat candidate John Fetterman’s claim that his disastrous performance against Mehmet Oz was a result of the system being “delayed” and “filled with errors.”

Nexstar communications chief Gary Weitman said in a statement that Fetterman’s team didn’t adequately practice with the system before the debate and chose to only rehearse once before Tuesday night’s debate. “It is unfortunate that Mr. Fetterman is now criticizing the closed captioning process employed by Nexstar during tonight’s debate,” Weitman said.

Some political analysts believe that following Fetterman’s performance in the debate, polls may shift in favor of Oz to fill the Senate seat currently held by Republican Sen. Pat Toomey.

While providing post-debate, political commentator Chris Stirewalt said it was “irresponsible” for Democrats to encourage Fetterman to continue with campaigning for the general election. “My heart really went out to John Fetterman as he struggled, watching as he tried to answer that question about his flip-floping was heartbreaking.”

Many claimed that criticism of Fetterman's performance was simple “ableist.”

While others contended that having sympathy for a stroke victim while realizing that he exhibits an inability to do his job is actually a reasonable view.

The Oz campaign declared victory after the debate and said their candidate would best “represent all Pennsylvanians,” adding that Fetterman, a Democrat and the state’s Lieutenant Governor, has “radical and dangerous policies” that would “put criminals over Pennsylvania families.”

“The contrast between Dr. Oz and John Fetterman was clear during tonight's debate. Radical John Fetterman couldn't defend why he has repeatedly pushed for extreme policies like decriminalizing heroin, banning fracking, and pardoning cold-blooded murderers,” said Oz Campaign Manager Casey Contres. “Dr. Oz articulated how he would restore balance to Washington and find common-sense solutions to lower costs for families and make our streets safer.”

According to Decision Desk HQ’s election model before the debate, Fetterman had a 53 percent chance of winning the seat over Oz’s 47 percent.