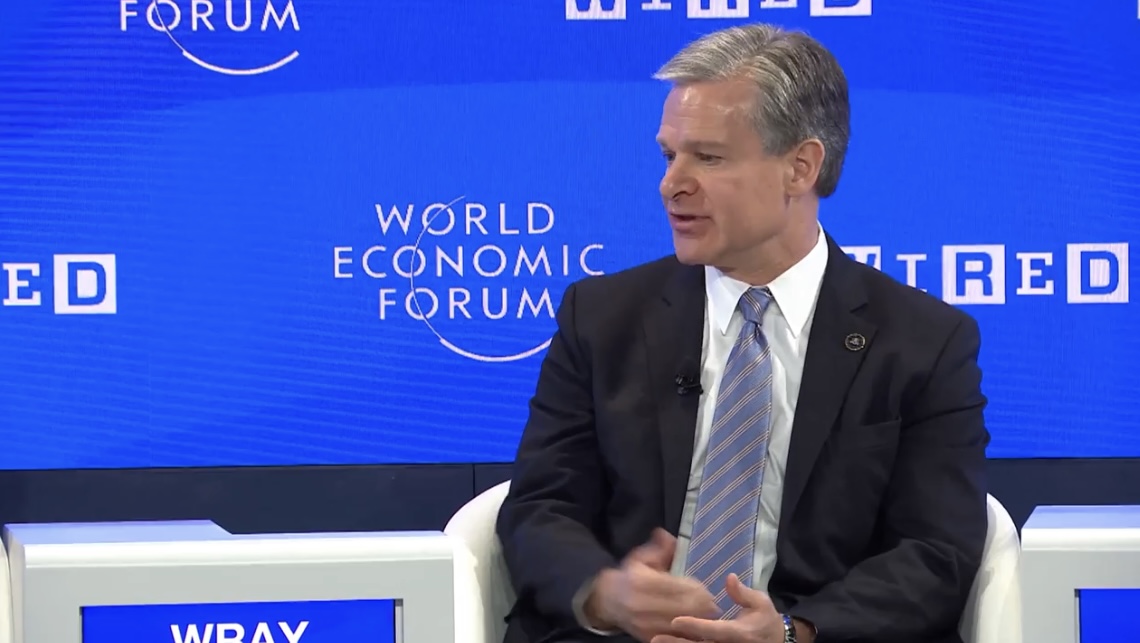 FBI Director Christopher Wray spoke at the World Economic Forum's meeting in Davos on Tuesday, accompanying his private meeting with banking leaders with a panel on cybersecurity. The panel on national security and cybersecurity focused on the conflict in Ukraine, using that war as a lens through which to discuss partnerships between tech companies and government, AI, and autonomous vehicles.

“The sophistication of the private sector is improving, and particularly important, the level of collaboration between the private sector and the government. Especially the FBI has I think made significant strides. We are focused on looking at cyber attacks,” Wray said. His comments are in-line with WEF founder Klaus Schwab's ideas on how leaders should “master the future” through public and private partnerships.

“We did see, as the conflict erupted and increased effort by the Russian intelligence services, which have been conducting malicious cyber activists against infrastructure for years,” he continued. For Wray, any tech that is beneficial in US hands is somewhat terrifying when in the hands of American enemies. This he said specifically with regard to China's AI programs, saying they are the biggest hackers in the world.

Prince was very clear on his stance on Ukraine, which he upheld with his company, but also said that those at Cloudflare were “data scientists, not political scientists,” and when there are issues, they check with the US government to find out how they should proceed in foreign countries.

Cloudflare notes with pride on its blog that “when Russia invaded Ukraine, Cloudflare jumped into action to provide services that could help prevent potentially destructive cyber attacks and keep the global Internet flowing.” They say that “cyberspace has been an active battlefield,” and they have protected Ukrainian websites from attacks.

Loosarian spoke about autonomous vehicles and robotics and their use in conflict. “This is our moment,” he said, “And I think it's also a moment for Silicon Valley tech companies to understand the importance of national security and working with governments to help protect western ideals.”

Svyrydenko believes that a “bridge between public and private companies” is key for Ukraine to succeed against Russia. This led Lichfield to ask about “civil defense,” if there are ways that people can tailor their behavior online to help Ukraine.

Wray's appearance at the forum led Congressman Troy Nehls to ask what Wray was doing there at all. Wray has spoken at the WEF before, going back to 2020.

“The competitive advantage the good guys have,” said Wray, is that “When we're all working together, then they're no match. Because the bad guys' relationships with each other are purely transactional. And they'll turn on each other in a heartbeat if it suits them. But because they're not constrained by the rule, because they're not constrained by international norms, we have to be mindful of the advance that gives them and work together in partnership.”