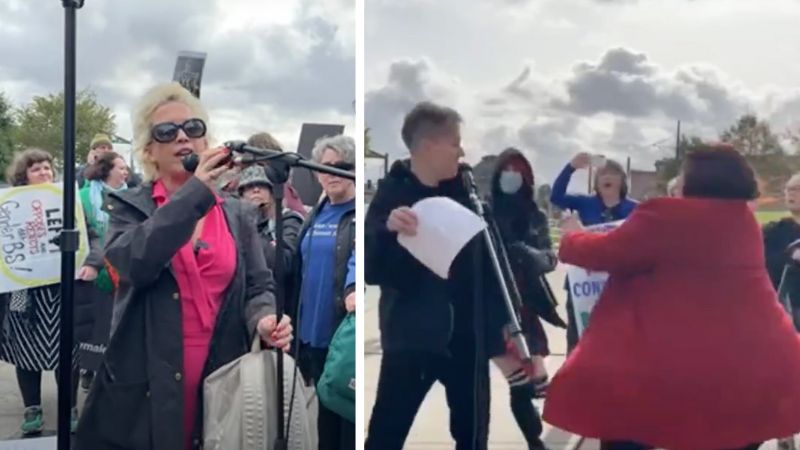 On Wednesday afternoon, Kellie-Jay Keen was forced to stop her Tacoma, Washington “Let Women Speak” tour stop early after far-left students from a nearby school descended upon the venue.

Just before concluding the event, Keen told the crowd, “if there’s any police here, there’s a man in a yellow hat that said he’s gonna f*cking kill someone.”

“Much love to you all, please donate if you’d like to see us have f*cking security at the next event. Thank you,” she concluded.

At one point, one of the protestors attempted to rush the microphone as a woman was speaking, yelling “get the f*ck out of here.”

At the beginning of the event, protestors were seen standing around the top of the amphitheater, wielding transgender pride flags and signs that read “no terfs in T town,” “crash the cis-tem,” and “trans women are women,” among others.

As Keen attempted to begin the event, the protestors began shouting, “no hate here,” to which attendees of the event shouted back, “let women speak.”

The event eventually moved to the other side of the amphitheater due to the noise, but the protestors moved to follow them.

Pointing to the crowd of protestors, Keen added, “now these people don’t want women to speak because they’re frightened of what we might say, and I think ultimately what frightens them is that they really do agree with us and they know we’re right.”

Over chants of “no hate here,” Keen said that she and others were there today because despite the right of free speech in the US, women “are absolutely losing the ability to speak freely.”

Speaking at the event was Lierre Keith, founder of the Women’s Liberation Front (WoLF).

Keith noted an ongoing lawsuit brought forth by the organization against the state of California regarding the ability for transgender women to be housed in female prisons based on their self-proclaimed gender identity.

Keith noted that of the biological males that are transferred to female prisons, “half are sexual offenders.”

“And children, for liking the wrong color or choosing the wrong toys, children are being denied their biological integrity of their own bodies.”

One woman, who said that she is disabled and bisexual, recounted seeking support online for her disability, only to note that the majority of influential people in this community are female, and use “they/them pronouns.”

She continued on to say that the transgender movement has had a devastating effect on the disabled community and that you are “excommunicated if you don’t say the chant.”

As more women spoke about their experiences, protestors continued to chant “hey hey, ho ho, bigot terfs have got to go.”

Keen later revealed that the protestors were students at a nearby school, telling the crowd that their educators said they needed to go in for lunch at 1.

Keen asked a man who identified himself as the principal why he can’t bring the students in, he said that he could, but “this is something important that they want to participate in.

When Keen asked whether gendered spaces were separated by biological sex, the man said that it’s a public school, and they have to serve everyone.

Keen's Tacoma stop on her US tour comes after she was forced to cancel her stop in Portland after threats of violence were made by Antifa members in the area.

Keen told The Post Millennial at the time, “I was alerted to multiple threats of violence against me as well as a local principal lying and saying I had links to the far right. I am relatively well known by name and sight to these violent, unhinged ideologues. The police have confirmed that they are too short-staffed to be reliable.”