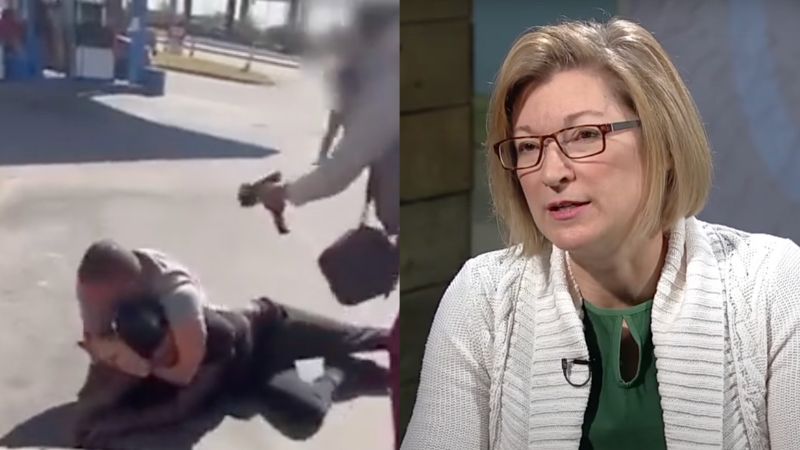 A far-left Jackson County Prosecutor, Jean Peters Baker, announced earlier in October that she will not prosecute a woman who shot an off-duty Kansas City, Missouri firefighter in the back, killing him within moments.

According to local news, Baker has faced criticism for soft-on-crime policies and pervasive instances of declining to charge in clear-cut cases. In response she said, “If a case is declined, it’s just because we don’t believe there’s sufficient evidence to get to that highest burden of proof.”

In the case of the death of the off-duty firefighter, 42-year-old Anthony Santi, video shows what happened on October 6 around 2:30 pm when an unidentified woman shot him in the back.

Local KMBC news reports that 23-year-old Ja'von Taylor was at a convenience store and got into an argument with the clerk. Witnesses say that Santi, who was also in the store, “heard a man disrespect a female cashier” and “reportedly stood up for the woman.”

The Kansas City Star reports that Taylor was mad at the female clerk because the store didn't sell the brand of cigar he was looking for. Taylor became increasingly agitated, was refused service, and told by both the clerk and Santi to leave.

Taylor then threatened them both, went outside, and retrieved a gun with an extended magazine from his white SUV. It was then that the woman accompanying Taylor became involved. At this point Santi physically engaged and bested Taylor, whom Santi grappled to the ground and successfully restrained in a stranglehold.

It was then that the woman began screaming and punching Santi before shooting him. Santi managed to get up and walk into the store where he died.

Local news investigated the legal basis for not charging her with any crime and a law professor with the University of Missouri-Kansas City, Steve Leben, said “Missouri has actually had a statute providing for a self-defense claim in defense of other people since 1979.”

In this case, Santi was defending himself against Taylor, who was armed, when he was shot by by the woman.

The prosecutor's office did not assert that Missouri's self-defense statute was the reason for not prosecuting the woman. However, the prosecutor, Jean Peters Baker, has both a history of far-left activism and a record of not prosecuting violent criminals.

Peters, who has been a staunch supporter of Black Lives Matter, Diversity, Equity, and Inclusion initiatives and a critic of Kansas City Police, was cited in a local conservative news magazine as being responsible for “prosecutorial inaction that has literally cost people their lives in Jackson County.”

Local news lists the crimes of Kyle Buchanan, Darryl Muldrow, and Deandre Thomas as examples of her soft-on-crime policies as the three men were arrested and released for a variety of crimes until a series of car burglaries in 2022 kept them locked up.

In the summer of 2021, Baker wrote a letter supporting a request made by activist groups to investigate the systemic racism in the Kansas City Police Department for “a high rate of violence against black and Latino people, racist hiring practices, and the department's lack of local control,” according to NPR.

Baker added that Kansas City police have “no accountability” to the community.

According to local news, in June of 2020 Baker refused to prosecute rioters arrested during violent protests, such as those at Country Club Plaza. Instead she opened a website where citizens could report police at the protests so she could better investigate “alleged police misconduct.”

That same month a local conservative news site noted that Baker gave a speech at a Black Lives Matter rally from the steps of City Hall and reiterated her anti-police sentiment.

Further, she supported the addition of plaques to statues of former President Andrew Jackson outside of courthouses clarifying that he was racist. NPR reports that she said, “if you were a minority — if you felt like justice could be attained in that building for you, when you walk by that bit of American history.”

She is also a supporter of DEI initiatives through University of Missouri–Kansas City School of Medicine's Office of Diversity, Equity, and Inclusion.